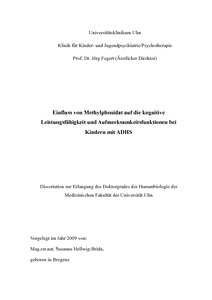 Background: Attention-deficit/hyperactivity disorder is associated with several cognitive deficits. Methylphenidate is an efficient method to reduce behavioural symptoms, but the influence on cognitive functions has not been sufficiently studied. The aim of the study was to test the hypothesis that MPH improves working memory and processing speed. Furthermore an MPH-induced improvement of variability of reaction time as well as a reduction of omission and commission errors in tasks measuring sustained attention, set-shifting, divided attention and impulsivity was suggested. Methods: With a repeated measures design (baseline-post measurement), 67 boys aged 6-13 were tested with an assessment battery measuring intelligence and attention abilities, comparing boys with and without an individually tailored doses of methylphenidate at the second assessment time. Instruments were the German version of the Wechsler Intelligence Scale for Children (WISC-IV; German: HAWIK-IV) and the Test of Attentional Performance for Children (Testbatterie zur Aufmerksamkeitsprüfung für Kinder, KITAP). Results: With the exception of processing speed, baseline measurements showed deficits of children with ADHD in all hypothesized parameters, i.e. working memory as well as variability of reaction time and accuracy in various attention parameters. Despite a remarkable reduction of behavioural symptoms in the experimental group at the second measurement compared with the first, improvements in cognitive abilities under medication were only present in the variability of reaction time in the alertness task and omission errors in the sustained attention task. Exploratory analyses revealed an effect of methylphenidate on verbal abilities. Conclusion: Methylphenidate shows an effect on simple attention skills rather than complex abilities. However, it seems to have an unexpected effect on verbal abilities, which should be a topic of further research.