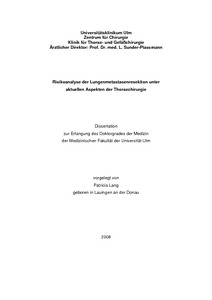 INTRODUCTION: The resection of pulmonary metastases can extend life of patients, even offering the possibility of cure. A risk analysis of the surgical procedure under the current practice of the thoracic surgery has been performed in this study. MATERIALS AND METHODS: Using a prolectivemethod, data from 199 patients with 300 lung resections for pulmonary metastases done in our university department (1/1994 - 01/2003) were evaluated. Risk factors and therapy resultswere investigated in an uni- andmultivariate analysis (Fishers Exact Test, Chi-Square and logistic regression). RESULTS: Overall lethality was 1% and the total morbidity rate was 19%. The 232 atypical resections were associated with 14% morbidity rate, while the anatomical and combined ones were associated with 38% (p = 0.0001). 19 patients revealed a FEV1<1.6l linked with a morbidity of 42%. In patients without FEV1 restriction morbidity was 18% (p=0.0172). Both, risk factors and the anatomical resection showed in the multivariate analysis a statistically significant increased morbidity. Additional risk factors (ASA> 2, age over 65, sex or cardial risk factors) did not influence postoperative morbidity. DISCUSSION: According to our data, no patient with good lung function should be withhold from atypical resection of pulmonary metastases offering the possibility of cure with low morbidity. However the indication should be critically evaluated if anatomical resection is required.