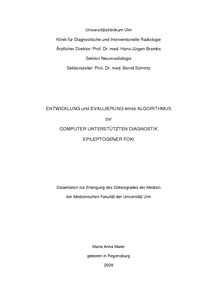 Epilepsy is a highly prevalent disease and surgery of epileptogenic foci is an increasingly important adjunctive therapy. Epileptogenic foci can be very subtle on neuroimaging studies and observational oversight of lesions depicted by special MRI studies, but not recognized by the radiologist is not uncommon. The purpose of the presented study is to develop and test a computer aided diagnostic tool with the aim to point the radiologist to certain spots of the patients´ brain which deviate from the signal intensity distribution of a normal population. High resolution brain scans (1 mm isotropic resolution turbospinecho T2 scans) from a population of 37 healthy individuals were retrospectively used for creating a normal distribution of brain MRI signal intensities. Therefore scanned volumes were coregistered, normalized and smoothed and mean and standard deviation volumes were calculated using SPM (statistical parametric mapping, Wellcome Dept. of Cognitive Neurology, London, UK). In a second step brain scans from 41 patients with known epileptogenic foci were normalized and smoothed in the same way. Resulting brain volumes were subtracted voxel by voxel from the mean signal intensity volumes of the normal controls and divided by the standard deviation volume of the normal controls. The resulting volume was used as an overlay to the morphological patient scan and interactively thresholded to depict deviations from the normal control sample. The results of the computer aided diagnostic algorithm were judged by an experienced neuroradiologist. All control scans were normalized with the SPM algorithm without errors. The algorithm certainly detected lesions in 63 %.The detection was deficient in 30 %. In 7 % of the results the computer algorithmus was not able to detect lesions. A computer aided diagnosis algorithm based on SPM algorithms to detect signal intensity deviatons from a normal distribution is able to help the radiologist finding a certain range of lesions.