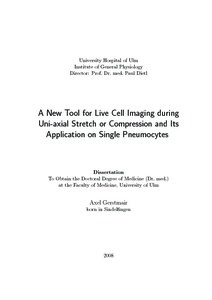 Mechanical stimuli control multiple cellular processes such as secretion, growth, and differentiation, but can also lead to diseases. A widely used method to investigate cell strain ex vivo is stretching an elastic membrane to which cells adhere. When it comes to uniaxial deformations of cells, imaging is usually impeded by movement of the sample along the strain axis out of the narrow field of view. In order to overcome this limitation, we established a new method that keeps a region of interest in the field of view of the microscope by utilizing a motorized stage controlled by a motion compensation mechanism. Given the current position of interest on the specimen and the strain or compression to be applied, the implemented algorithm calculates the expected displacement and, synchronously to applying the deformation, directs the motorized stage to follow accordingly, thus stabilizing the observed area during imaging. Movement and strain tests showed that the system worked reliably. Using motion compensation the absolute displacement of the observed area assumed values of - 0.1 % +/- 1.9 % (mean +/- standard error of mean) at 50 % strain, meaning the originally observed area was always kept in the field of view when using a 40x objective. The system was tested on primarily cultivated alveolar type two (AT II) cells. Using dual fluorescence microscopy (Fura-2 AM and FM1-43) to detect both transient rises of intracellular calcium concentration ([Ca2+]i) and exocytotic secretion of surfactant, i.e. lamellar body (LB) fusions, a series of strain protocols and their effects on AT II cells were examined. The experiments showed similar effects and thresholds for uniaxial strain as previous studies for biaxial strain with regard to transient [Ca2+]i rises and LB fusions. Except for transient [Ca2+]i rises elicited at a significantly higher percentage by a protocol with increasing strain amplitudes there was no statistically relevant difference in the tested strain protocols.