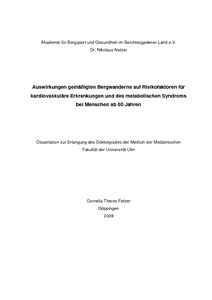 Background: Effects of moderate hiking on cardiovascular disease and the metabolic syndrome have not been identified. Hiking vacations or hiking in the context of rehabilitation after myocardial infarct show positive effects. Is there any positive effect of moderate hiking on the above mentioned risk factors in elderly people? Methods: All people over 60 years were animated to join the study. They were required to hike 500 meters uphill once a week, to take their blood pressures every second day and to make the analysis (HDL, LDL, HbA1c, BMI) at the general practitioner at the beginning and then annually. The results of the first and the annual analyses were compared to the general German population. Furthermore the changes during the observed period were statistically evaluated by the Wilcoxon rank-sum test. Results: 30 volunteers, 12 women, 18 men took part over at least one year. They showed healthier parameters at the beginning of the study compared to general population. The changes over the year were not statistically significant but showed a tendency to more healthy values after one year. Conclusion: The volunteers were all more or less regularly hiking before starting the study. This caused a selection-bias, which was used to perform a part of the results - to compare the preselected group with the general population. In this comparison the study group had clearly better values than general population. This and the tendency to better parameters in the course of the study are seen as definite positive effects. For a final conclusion the duration of the study was to short and the number of volunteers was too small.