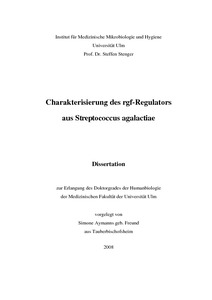 Streptococcus agalactiae causes severe infections in newborns and in immunocompromised adults. For a successful host colonization many different single components need to be well-coordinated. Two component signal transduction systems often fulfil such regulatory functions. The two component system rgf of S. agalactiae shows similarity to regulation systems of other gram-positive pathogens. It affects the binding to immobilized fibrinogen and influences the expression of the C5a peptidase. To better characterize the rgf system, distinct deletion mutants lacking the four rgf genes rgfB, rgfD, rgfA (encoding a putative response regulator) and rgfC (putative histidine kinase) respectively were constructed. Two dimensional gel electrophoresis showed differences in the expression pattern of delta-rgfC compared to the wildtype. The differing proteins turned out to be the protein HPr, the ribosomal protein S2 and the arginine deiminase, a well-known pathogenicity factor. In Real Time RT-PCR analysis an influence of rgf on the expression of the corresponding genes was confirmed. In overnight grown cultures the deletion of rgfC led to inhibition of the arginine deiminase promoter. RgfB deletion mutants showed an increased rgfA expression in the early stationary growth phase. Replacing the supernatant of the delta-rgfB culture with wildtype supernatant resulted in normal rgfA expression patterns. This supports the hypothesis of an autoregulatory mechanism like it is described for other two component systems. The control of fibrinogen binding through rgf has previously been described. By adding fibrinogen in the stationary growth phase an inhibition of the rgf promoter was observed, confirming earlier results. The ability to bind to surface associated host molecules plays a major role for the adherence and invasive ability of S. agalactiae. In conclusion the rgf system of S. agalactiae is important for the regulation of different pathogenicity factors in a growth phase dependent manner.