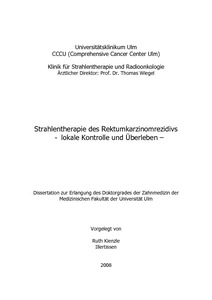 Background: Despite the improvement of therapeutic regimes of rectal cancer a recurrence of rectal cancer still presents a problem, uncontrollable/intractable pain and bad survival prognosis. Irradiation of recurrence is part of a multimodality treatment concept. Aim of the study was to evaluate influence of radiation therapy on pain relief and quality of life in contrast to literature. Patients and methods: Between 1980 and 2003, 200 patients with recurrent rectal cancer received irradiation; median age was 64,8 (42,5 to 86,1 years), gender distribution male : female was 127 : 73. Median delivered dose was 56 Gy with a range from 8 Gy to 70 Gy. Results: The medical records were reviewed retrospectively, if data were insufficient, interviews with different general practitioners were performed. Data analysis was performed on pain relief, quality of life, metastasis free survival, overall survival and potential side effects. A good and very good pain relief was observed at a delivered dose of > 60 Gy. Side effects III and IV (EORTC) appeared only in a few patients. The overall rate of survival at five years was 27,7 % with a median survival time of 43,7 months. The recurrence free survival rate at five years was 4,4 % with a median recurrence free survival time of 18,1 months. The metastasis free survival rate at five years was 11,1 % with a median metastasis free time of 25 months. Independent of the dose 70,8 % of the patients were pain free up to 11 months after irradiation. A very well and well effect of pain was common found by a dose of 50 Gy and more. Side effects were found frequently by a dose more then 60 Gy. Conclusion: Irradiation in recurrent rectal cancer achieves good pain control over an interval of nearly one year. But there was an increasing rate of side effects accompanied within higher total dose.