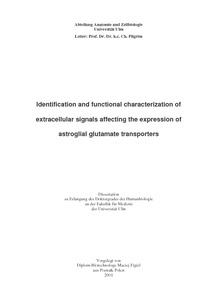 The aim of the present study was to identify extracellular factors which affect the expression of glial glutamate transporters. Previous studies revealed that glial glutamate transporters expression increases in the presence of neurons and that this effect is mimicked by the activation of cAMP-dependent signaling pathways. Therefore PACAP, the most potent activator of cAMP presently known, was considered as a neuronal factor which might affect glial glutamate transport. It was observed that neuron-CM promotes glutamate transporters expression and that this effect can be abolished by addition of anti-PACAP-38 antibodies or PAC1-R antagonist PACAP-(6-38). Furthermore, direct treatment of cultured cortical astroglia with PACAP-38 promoted the expression of GLT-1, GLAST and GS at the mRNA and protein level increase in the Vmax-value of sodium-dependent uptake of 3H-glutamate into cultured glial cells. The observation that even in the absence of neurons, cultured cortical astroglia express GLT-1 as well as GLAST pointed to the existence of additional extracellular signals involved in the expression of glial glutamate transporters. The extracellular factors known to profoundly interfere with glial development are the EGFR ligands, EGF and TGFa, as well as FGF-2. Treatment of third passage cortical astroglia with EGF and TGFa, but not with FGF-2, for 72 h robustly promoted GLT-1 and GLAST expression at both mRNA and protein levels resulting in a subsequent 1.7-fold increase in the Vmax-value of sodium-dependent 3H-glutamate uptake. A pharmacological approach, using specific inhibitors for distinct signalling proteins, was chosen to further analyze the signal transduction pathways mediating the stimulatory effects of PACAP, TGFa and EGF on GLT-1 and GLAST expression. These studies revealed that depending on extracellular factor, the stimulatory effects on glutamate transporters expression involve the activation of NFkB in combination with either PKA, PKC and/or Akt.