Interscalene block: a comparison between electrostimulation and ultrasound-guided techniques 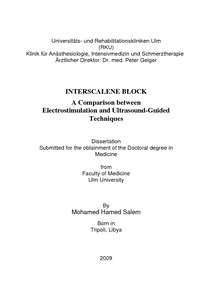 In order to compare conventional interscalene brachial plexus block (ISBPB) using surface landmarks and nerve stimulation to ultrasound-guided blocks for shoulder surgery, 60 patients, 33 males and 27 females, ranging in age between 16 - 85 years were included in this prospective study and randomized into 2 matched groups, 30 patients each. Group A using nerve stimulator (NS) alone and group B guided by 2-dimensional ultrasound (US) as well. Prilocaine 1 % was used for the block while ropivacaine 0.2 % was used for the postoperative patient controlled analgesia (PCA). The time taken to stimulate the plexus and the onset of block were recorded. The visual analogue scale and regain of motor power were checked at regular intervals. Patient satisfaction while inserting the needle, during and after surgery was also questioned. The time spent to detect the brachial plexus and inject the local anaesthetic was not significantly varying between both groups (p = 0.3). Although in more than half of the patients in group B we needed to change the needle position once (n: 13) or twice (n: 4), a successful motor response from the first trial was achieved in all but one patient in group A. In this patient, however, we were only able to locate the plexus after using US. There was no significant difference as regards the time taken for the block to start (p = 0.2). No significant differences existed in postoperative pain, regain of motor power, and patients’ satisfaction at all time intervals. Complications were nearly equally divided between both groups and were transient. We conclude that ISBPB is equally high effective using nerve stimulation and ultrasound guidance. No advantage could be attributed to one or the other technique if the blocks are performed by anaesthesiologist experienced in both techniques. Electric nerve stimulation and ultrasound guidance should be regarded as complementary rather than alternative tools.