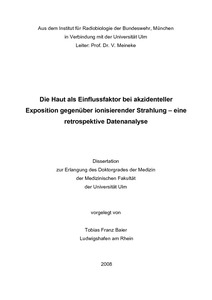 The data bank SEARCH contains courses of illness of persons who were considerably exposed to ionizing radiation between 1945 and 2003 in 78 worldwide nuclear accidents. Up to now it has been necessary to differentiate between reversible and irreversible damage to the stem cell compartment of the bone marrow to make early predictions of the clinical course and outcome of patients after radiation exposure. This is possible by the interpretation of typical haematopoietic response patterns of peripheral blood cell lineages. Recent radiation accidents have dramatically shown, that radiation induced skin damage can be a factor determining the prognosis and outcome of accidentally irradiated patients, especially when having the chance to treat patients suffering from irreversible damage of the haematopoietic system by stem cell transplantation. The purpose of this work was to examine, if there is a correlation between the extent of radiation induced skin damage and the prognosis of survival in the first 100 days after radiation exposure. It could be shown that there is a significant correlation between the expansion of radiation induced skin damage and the prognosis of survival of the patient. The mortality risk in the acute phase is seven times higher if more than 50 percent of the body surface is affected. The chance to survive the acute phase is five times higher, if the affected body surface counts less than 50 percent. The course of acute radiation syndrome can be fatal if more than half of the body surface is concerned, even if the haematopoietic damage is potentially reversible. Therefore the development of stage-dependant treatment protocols for radiation induced skin damage is most important. The extent of radiation induced skin lesions after accidental radiation exposure can be estimated and documented by every medical doctor. It is an important finding, which is easily to be raised.