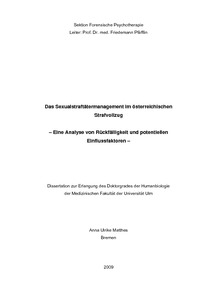 The study aimed to analyse the influence of treatment and support conducted in prison as well as the way of release preparation on sexual offender recidivism in the Austrian penal system after the implementation of systematic assessment in the Federal Evaluation Centre for Violent and Sexual Offenders (BEST) in 2002. Data of 273 sexual offenders assessed in the BEST have been concluded in the sample, 273 sexual offenders imprisoned before structured sexual offender management was implemented served as controls. Recidivism data considering different offence categories (any offence, violent offence, violent nonsexual offence, sexual offence hands on, sexual offence hands off), time span between release and recidivism and - considering the assessed offenders (study group) - different risk factors’ and protective factors’ influence had been analysed. Analyses had been conducted regarding the whole group of sex offenders as well as regarding rapists and child molesters separately. The group of child molesters had been subdivided by means of their relationship to the victim (strangers, acquaintances, relatives). In most subgroups of offenders, reoffence rates differed significantly in favour of the study group concerning any offences, violent offences and violent nonsexual offences. Regarding sexual reoffences, no significant differences have been found. Survival analyses controlled for static risk factors delivered equivalent results. Regarding the group of assessed sexual offenders, data about behaviour and treatment in prison had been analysed. In this regard, psychological treatment and social worker’s support could be identified as protective factors concerning sexual reoffence, while misconduct, suicidal behaviour, breaking rules and drinking alcohol appeared to be risk factors for violent offences and violent nonsexual offences. Having been released on probation reduced recidivism risk in child molesters.