The Big Five and their role within error processing: evidence from event-related fMRI 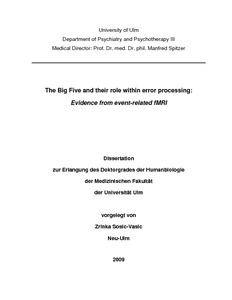 Objective: Error processing is operated by a neural network mostly residing in the frontal parts of the brain. However, not all involved brain regions are yet sufficiently understood. Also, investigations of possible influences of individual differences in personality traits on neural error processing are rare. The major aim of this dissertation was to investigate the modulating effects of the Big Five personality traits on the neural signaling of erroneous responses. Method: Using functional magnetic resonance imaging, 17 healthy adult subjects were studied while performing a modified version of a combined Eriksen Flanker-Go/NoGo task. The modification permitted for the distinction of two error types: commission errors in NoGo trials and Go trials (representing the major response goal and the subordinate response goal in the present task, respectively). Individual differences regarding Big Five personality traits (Neuroticism, Extraversion, Openness for Experiences, Agreeableness, Conscientiousness) were assessed using the NEO-PI-R measure (Costa & McCrae, 1992). Results: Behavioral data showed that the task was reliable in eliciting errors. Functionally, significant error-related neural activity in the dorsal anterior cingulate cortex (dACC) and the left inferior frontal cortex (IFC) was found. Among all personality traits only Extraversion demonstrated a significant positive correlation with NoGo errors in the dACC, and Conscientiousness with NoGo errors in the left IFC. In addition, Conscientiousness demonstrated a positive trend correlation just above the set significance threshold with Go errors also in the left IFC. Discussion: Interpretations of the modulating effects of these personality traits are provided in terms of reward expectancy for Extraversion and task-set related memory representation for Conscientiousness. From the latter we conclude a slightly new interpretation of the functional role of the IFC complex during error processing.