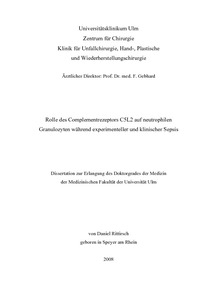 Sepsis represents a major problem in modern surgery and intensive care medicine. During sepsis, uncontrolled activation of the complement system occurs, including excessive generation of the anaphylatoxin C5a. Under these conditions, interaction of C5a with its receptor, C5aR, can cause a dysfunction of neutrophils as the first line of cellular defence. Recently, a second C5a receptor has been discovered, termed C5a-like receptor 2 (C5L2), the function of which remains unclear. In contrast to C5aR, interaction of C5a with C5L2 does not result in intracellular signalling. The aim of the present study was to investigate changes of C5L2 expression on neutrophils during systemic inflammation (in vitro, experimental and clinical sepsis). Uncontrolled generation of C5a during sepsis was simulated in vitro by incubation of neutrophils with recombinant C5a. Experimental sepsis in rats was induced by cecal ligation and puncture in the presence or absence of antibody-induced blockade of C5a. Furthermore, neutrophils from patients with septic shock were analysed for C5L2 expression by western blotting and flow cytometry. Exposure of neutrophils with C5a in vitro resulted in a time-dependent reduction of C5L2 expression. Likewise, neutrophils from septic rats showed a loss of C5L2 in contrast to sham-operated animals. Blockade of C5a not only prevented the loss of C5L2 but also significantly improved the outcome (survival). In accordance, patients with septic shock (n = 26) exhibited a significantly reduced expression of C5L2 on neutrophils in comparison to healthy volunteers (n = 14). Interestingly, the extent of C5L2 reduction correlated with the development of multi-organ failure (MOF). These findings indicate that C5L2 expression during sepsis underlies a C5a-dependent regulation and correlates with the outcome. In future, C5L2 might not only represent a therapeutic target for immunomodulatory strategies but might also be used as a diagnostic or prognostic marker for sepsis.