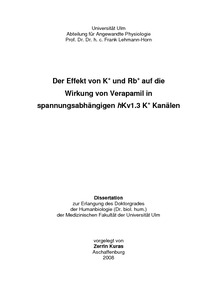 The phenylalkylamine verapamil blocks current through the voltage-gated K+ channel Kv1.3 in the open- and inactivated state of the channel but not the closed state. The binding site for verapamil was proposed to be close to the selectivity filter and the occupancy of the selectivity filter might therefore influence verapamil affinity. To test for this, we investigated the influence of the intra- and extracellular cation species on the verapamil effect. The experiments showed that verapamil affinity was highest in high [K+]i and lowest in low [Rb+]i indicating an influence of the intracellular cations on verapamil affinity. Experiments with a mutant channel (H399T), which exhibits a strongly reduced C-type inactivated state, demonstrated that part of this change in verapamil affinity in the wild type channel was presumably caused by a change in C-type inactivation. External K+ and Rb+ could influence verapamil affinity by a voltage-dependent entry into the channel thereby modifying the verapamil off-rate and in addition causing a voltage-dependent verapamil off-rate. Our results suggest that verapamil unblock was mainly due to the voltage-dependent closing of the channel (state-dependent) implicating a second open state of the channel. This hypothesis was confirmed by the tail current time course dependency on the prepulse duration. From these results we conclude that the wt hKv1.3 channel undergoes at least two different conformational changes before finally closing.