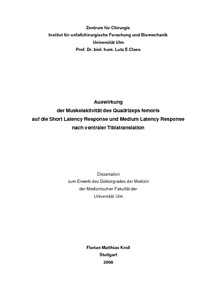 Ruptures of the anterior cruciate ligament are one of the most common injuries in sport accidents. In clinical everyday life we distinguish two different groups of patients; one shows a mechanical instability, which is easily to test, the other one shows a functional instability without a mechanical component. The functional instability is described by the reflex contraction latency response of the anterior cruciate (RHCL). The RHCL is participated into a Short and a Medium Latency Response (SLR and MLR); Patients with a hurt anterior cruciate ligament show a significant extension of the Latency Response. Unknown is the influence of the antagonist muscles activity to the latency response. Our results demonstrate that the latency response time is not significantly influenced during muscle activity of the quadriceps. But beside notable it has been showed a slight increased amplitude despite a decreased impact. The applied experimental method is reliable in case of antagonistic muscle activity and can be used without controlled activity rates of the quadriceps.