Spar3, a novel protein of the postsynaptic density 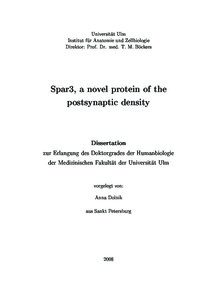 The postsynaptic density (PSD) is a complex proteinaceous structure specialized for the postsynaptic signal transduction. Partial clones of novel protein belonging to SPA family, Spar3, were obtained in a yeast-two-hybrid screen with the molecule ProSAPiP1, which is a part of the PSD scaffold. Spar3 is 1776 aa protein that codes for a PDZ, a RapGAP and a coiled coil domain. The Spar3-ProSAPiP1 interaction is mediated by a leucine zipper containing coiled coil region of Spar3 as revealed by blot-overlay assays, pull-down and cotransfection experiments. Spar3 is widely expressed in the brain with high transcript levels in hippocampus, cortex and cerebellum. The light and electron microscopy showed that the protein is localized at dendritic spines. The C-terminal part of Spar3 (1300-1776 aa) is critically involved in this synaptic targeting. The biochemical fractionation revealed that Spar3 is enriched in the PSD along with a major PSD scaffold protein ProSAP2. The highest level of Spar3 protein expression was found in the hippocampus, cerebellum, cortex in the first week of development, which coincides with high level of synaptogenesis. During development the Spar3 protein level decreases gradually. In cultured neurons overexpression of Spar3 induces other effects on neurons as already described for the other family members Spar and Spar2. It causes the formation of filopodia-like structures, which are not associated with the presynaptic marker protein bassoon. A yeast-two-hybrid screen using the C-terminal part of Spar3 as a bait resulted in the identification of three members of the Fezzins family: ProSAPiP1, LAPSER1 and PDZ-Zip70. Coimmunoprecipitations, pull-down assays and cotransfection experiments of LAPSER1 and Spar3 in hippocampal neurons confirmed that the interaction between those two proteins occurs in vivo. However, in cultured neurons cotransfected with the Spar-LAPSER1 and Spar3-LAPSER1 interaction seems to be different with respect to affinity. Both ProSAPiP1 and LAPSER1 bind to the PDZ domain of ProSAP2/Shank3 and should connect Spar3 to the master scaffold molecule of the PSD. The characterization of Spar3 adds a new member to the growing list of PSD signaling molecules at spines and synapses. This new molecule might therefore be important for the structural remodeling of spines and PSDs.