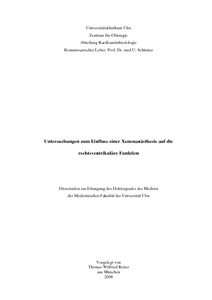 Examinations about Xenon anaesthesia and right ventricular function Until these studies were performed, there was no study about the influence of xenon on right ventricular function to our knowledge. Due to its chemico-physical properties, xenon has a possible influence. A Swan-Ganz-Catheter was used to measure right ventricular ejection fraction (RVEF). Additionally we examined the influence of xenon on resuscitation. 30 pigs were anaesthetized intravenously, instrumentated and randomized into Xenon- or Control-Group. Xenon or nitrogen was added in steps of 10% with a final concentration of 75% and circulatory and respiratory parameters were registered. After that, a cardiac arrest was induced for 4 minutes, followed by cardio-pulmonary resuscitation until return of spontaneous circulation. Finally we observed circulatory and respiratory parameters for 4 hours. At 40% inspiratory Xenon-Fraction we found a significant increase of peak and mean airway pressure and of mean pulmonary artery pressure compared to baseline values. No changes in control group and no difference between the groups were registered. Neither RVEF nor cardiac output showed any changes due to the inspiratory gas mix. Resuscitation was possible without any measurable influence of Xenon, resuscitation time and required drugs were unaffected. During observation time we found a significant increase in peak airway pressure after 60 minutes of observation compared to control group. No changes of pulmonary artery pressure were seen. Changes in RVEF appeared due to resuscitation procedures. These results show the already known physical effect of xenon during wash-in without an influence on right ventricular function. The effect of raising airway pressure after one hour of anaesthesia was not seen before and leaves a question about the underlying mechanism. Further studies are required to examine these changes. Finally this effect showed no influence on right or left ventricular function or resuscitation.