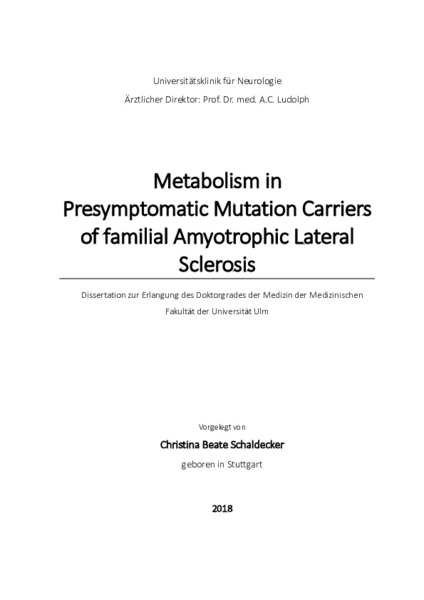 Metabolic alterations such as weight loss, hypermetabolism, and disturbed glucose metabolism are common findings in patients with Amyotrophic Lateral Sclerosis (ALS). In the framework of a longitudinal study with the objective to characterize the presymptomatic phase in familial ALS (fALS) patients-to-be with inherited mutations in their family history, this cross-sectional, explorative analysis exploits metabolic parameters obtained by anthropometric data, indirect calorimetry, and an oral glucose tolerance test (OGTT). So far 73 participants (44 non-carriers (NC), 29 mutation carriers (MC) had eligible data for body composition analysis and 30 NC/20 MC for calorimetric analysis. As control groups, 40 healthy participants (HC) and 19 sporadic ALS (sALS) patients were additionally examined. Age-adjusted body mass index (BMI) was significantly lower in MC compared to NC (t(71) = 2.21; p = 0.031). This effect was even stronger in those participants with a family history of a chromosome 9 open reading frame 72 (C9orf72) mutation, where mean BMI was also lower compared to HC (t(53) = 2.243; p = 0.029), while no difference in mean BMI was found compared to sALS patients. Glucose metabolism was tested with an OGTT, revealing pathological results in four NC and five MC. Of note, these MC had a surprisingly low mean BMI of 21 kg/m² for developing pathological glucose tolerance, whereas the respective NC averaged on a mean of 26.9 kg/m². Indirect calorimetry was performed to measure resting metabolic rate (mRMR) which was put into relation to calculated resting metabolic rate (cRMR) defining the metabolism ratio (MR = mRMR/cRMR). MC (n = 20) had a significantly higher MR compared to HC (n = 33; (t(51) = 2.2; p = 0.032). This effect was stable in the male cohort t(21) = 2.363; p = 0.028, but not in females (t(28) = 0.868; p = 0.393). However, NC also had elevated MR compared to HC (t(61) = 4.291; p = 0.000). In summary, these findings indicate that metabolic alterations occur already in the presymptomatic phase. Longitudinal data have to show the development of these alterations throughout the lifespan of those eventually going to develop (f)ALS. These cross-sectional data imply that sex and the kind of underlying mutation affect the presence and character of metabolic alterations. It is possible that compensatory mechanisms, such as an upregulation of PGC-1α, try to maintain neuronal health with the side effect of metabolic changes. The hypothalamus as a central regulator of metabolic balance in the brain is a good candidate for a venue of ongoing compensatory and pathophysiological mechanisms in ALS. Overall, these cross-sectional data have to be supported and enhanced by longitudinal observations and larger group sizes in the future to gain more insight into metabolic alterations during the presymptomatic phase of fALS.