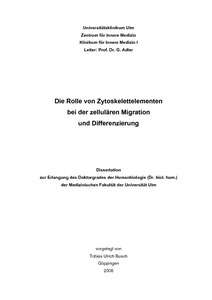 Cell migration is an essential step during metastasis. Whereas the function of actin filaments is well described, the role of keratin cytoskeleton in migration of epithelial tumor cells is yet not clearly understood. Further work could show that the bioactive lipid SPC induces keratin reorganisation, phosphorylation and cell migration. This work was intended to analyse the role of posttranslational modifications of keratin on cell migration and cell elasticity. The data show that the effect of keratin 8 phosphorylation at Ser431 resembles K8 knock-down as concerning cell migration and elasticity. Results showed that both SPC-induced phosphorylation and reorganisation of keratin depends on MEK-ERK pathway activation. Experiments proved that K8-S431-phosphorylation was necessary and sufficient to reorganise keratin and influenced keratin filament turn-over. Besides, phosphorylation of K8-S431 increased cell migration and changed formation of focal contacts. Therefore K8-S431-phosphorylation has great influence on essential steps in metastasis. K8 silencing triggers migration as well. Analysis of cell elasticity of keratin-deficient cells involving AFM brings first indications of a direct connection between keratin and cell elasticity. Moreover, K8-S431-phosphorylation acts similar in migration like keratin deficient cells and resembles functional keratin knock-out. In the second part, influence of actin on myogenetic ES cell differentiation was examined. SPC was shown to be a potent stimulator of formation of F-actin and focal contacts, but doesn’t have any effect on myogenetic differentiation. However inhibition of ROCK blocks formation of F-actin and focal contacts and decreases differentiation of ES cells into myogenetic lineages. Interestingly inhibition of ROCK increases growth of differentiating but not of undifferentiated stem cells. Therefore modulations of actin have consequences on myogenetic differentiations as well as on proliferation of ES cells.