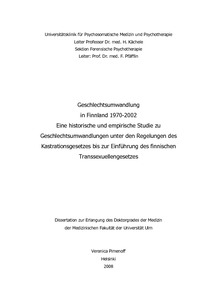 Sex reassignment in Finland 1970 - 2002 - a historic and empiric study of sex reassignment under the provisions of the Act on Castration until the entry into force of the Act on Gender Confirmation of Transsexual Individuals. The development of the Finnish treatment programmes and provisions for legal sex reassignment 1970 - 1992 was examined, and 44 male to female and 44 female to male transsexual persons completed a questionnaire examining their experience of the assessment and treatment paying particular attention to their perception of the attitudes of the gender team and their own compliance or non compliance with the treatment programme. All patients wished to live permanently as a member of the desired sex and to have both surgery and hormonal treatment. Male to female transsexuals stressed the importance of surgical sex reassignment, female to male transsexuals the importance of legal sex reassignment. The changes in the offer of clinical treatment and legal sex reassignment and the phenomenology of the wishes of the patients showed a considerable mutual impact. Most changes in the treatment programme were initiated by the patients despite of the resistance of the gender teams. The treatment offer was not completely in line with international standards of care. The treatment improved the vocational functioning and social and psychic adaptation of the patients significantly. A considerable number of patients did not comply with the treatment programme but deliberately falsified their histories and sought hormone and surgical treatment without the recommendation of the psychiatrist. Their non compliance appeared not to be the result of close contact to the transgender peer group. The treatment outcome of the compliant and non compliant patients was equally favourable, but the duration of treatment of the compliant ones was longer. In the light of these results a review of the role of the gender team is needed.