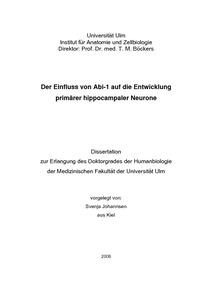 Learning and memorizing processes depend on the correct integrity of the neuronal network. Fully functional neurons require a complex dendritic tree and mature synapses. Rearrangement processes of the actin cytoskeleton are involved in dendritogenesis as well as in synaptogenesis and the maturation of synapses. It was shown that Abl interactor 1 (Abi-1) and its interaction partners are very important for the formation and reorganization of the actin cytoskeleton in different model systems. In this study the influence of Abi-1 on the development of primary rat hippocampal neurons was investigated. Abi 1 localizes in neurons at F actin rich structures like growth cones, filopodia and synapses. Downregulation of Abi-1 protein expression in these cells, using RNAi technology, led to an increase of the number of dendrites. Also the density of synapses was reduced and the number of immature, filopodium-like shaped spines was increased. Hippocampal neurons overexpressing Abi-1 showed an opposite phenotype with a simplificated dendritic tree and a higher density of synapses. The number of mature, mushroom shaped synapses was increased. Looking for mechanisms responsible for the formation of the different phenotypes it was shown that the synaptic localization of the Abi-1 interactors EGFR substrate 8 (Eps8) and cellular abl tyrosine kinase (c Abl) was reduced by overexpression of Abi-1 and increased in RNAi treated neurons. Therefore, Eps8 and c-Abl are possibly involved in the formation of the different phenotypes by remodelling of the actin cytoskeleton. Altogether, a balanced Abi-1 protein expression is required for a physiological development and maturation of hippocampal neurons in vitro.