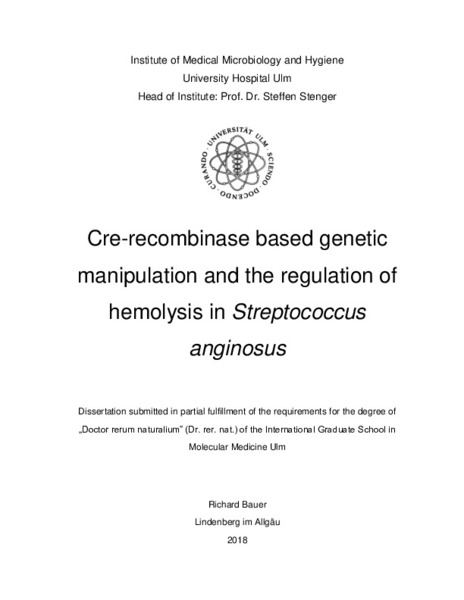 Streptococcus anginosus is considered a human commensal of mucosal membranes. However, increasing number of reports showed their isolation from invasive infections highlighting the clinical relevance of this species. We aimed to establish a fast and reliable genetic manipulation technique to be able to investigate S. anginosus on the genetic level which would help to increase our scarce knowledge about the pathogenicity mechanisms in this species. Therefore, we combined the competence system of S. anginosus and the Cre-recombinase system which allows the generation of markerless gene deletions. With the help of the established genetic manipulation technique we were able to investigate the role of the Catabolite control protein A (CcpA) in the regulation of the Streptolysin S (SLS) expression. We were able to demonstrate that different sugars had a different influence on the SLS promoter activity in an EGFP based reporter system, indicating a Carbon Catabolite Repression mechanism mediated by CcpA and we further confirmed this by the generation of a ccpA deletion mutant. The findings could be reproduced using a functional hemolytic assay and we verified the effect of CcpA on the SLS expression by constructing a ccpA complementation strain. Analysis of the SLS promoter finally led to the identification of a CcpA binding site that was verified by the promoter reporter assay using mutated promoter sequences as well as electrophoretic mobility shift assays. Thus, we were able to demonstrate for the first time the regulation of a potential virulence factor in the emerging pathogen S. anginosus and we established a Cre-lox based genetic engineering technique that will facilitate the investigation of pathogenicity mechanisms in this species.