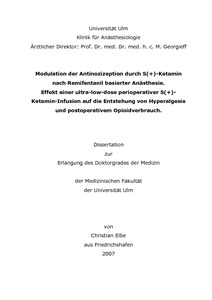 Hyperalgesia and chronic pain could be attenuated, especially when mu-agonists are administered. By activating protein kinase c the NMDA-receptor gets phosphorylated and opioids may induce prolonged hyperalgesia. NMDA-receptor antagonists, such as S-(+)-ketamine, may have beneficial effects on perioperative pain modulation. We performed a prospective, double-blinded, randomized trial with 47 patients undergoing abdominal surgery. The patients were randomized to 3 groups: preemptive group got preoperative s-ketamine-bolus 0.075 mg/kg, followed by an intraoperative and postoperative s-ketamine infusion with 1 µg/kg/min, stopped 2 hours postoperatively; prophylactic group got postoperative a s-ketamine infusion, wich was started at the end of the surgical procedure; control group got only saline. We followed up morphine consumption, pain scores, sedation, patient satisfaction and side effects up to the forth postoperative day. Regarding the medians, we found an advantage of 32.5 mg less morphine consumption of the preemptive group and 19.9 mg less morphine requirements of the prophylactic group, compared with the control group. The effect was not statistically significant mainly due to the large spread of values. We did not see any ketamine associated side-effects like nightmares, hallucinations, nystagmus or diplopia; general side effects like postoperative vomiting or shivering were less in the preemptive group. The pain scores, sedation and satisfaction did not differ between the groups. We could not find a significant opioid-sparing effect of s-(+)-ketamine, the way we administered. We noted some evidence of a beneficial longterm effect by the preemptive administration. A larger scaled study might have been able to demonstrate differences more clearly, a followed calculation leaded to a need of about 250 patients per group. Perhaps the effects are more to see in the reduction of hyperalgesia than in reduction of morphine requirements.