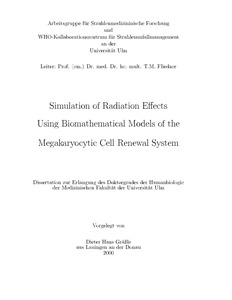 The thesis presents the development and application of biomathematical models of the megakaryocyte-platelet renewal system as a tool for the analysis of radiation effects on hematopoiesis and thrombocytopoiesis. The basic structure of the used biomathematical models follows the currently accepted biological concepts of hematopoiesis and thrombocytopoiesis in mammalians and humans. It contains compartments for pluripotent stem cells, noncommitted progenitor cells, committed progenitor cells, endoreduplicating precursor cells, megakaryocytes in different ploidy groups, average megakaryocyte volume within ploidy groups and thrombocytes. Regulation functions are included to represent the compensatory feedback mechanisms of the megakaryocyte-platelet system. The compartments, the regulator structure and the cell-kinetic parameters of the model are derived from biological experiments. Seen from the mathematical perspective, the model consists of a set of concatenated nonlinear first-order ordinary differential equations. For analyzing the effects of acute irradiation to the hematopoietic system, the basic model was extended to simulate acute irradiation effects. This model was included into an estimation method based on optimization algorithms, which is capable to calculate survival fractions of stem cells, based on thrombocyte counts after radiation exposure. To analyze chronic radiation effects to hematopoiesis, the model was extended by components describing an radiation induced excess cell loss in radiosensitive compartments. A method for the estimation of excess cell loss rates from thrombocyte counts based on the model and optimization algorithms was developed. Computational mathematical analysis with stochastic simulations of the model showed the existence of a turbulence region of the excess cell loss rate, in which the hematopoietic system is at high risk to fail.