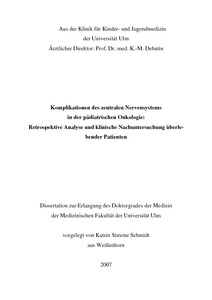 Background. Clinical studies analysing CNS complications in pediatric oncology symstematically are rare. Procedure. In a single center retrospective analysis, CNS complications in 950 subsequent pediatric patients treated between 1992 and 2004 by chemotherapy or hematopoietic stem cell transplantation (HSCT) were studied. 46 patients had pre-existing CNS diseases and were excluded. Out of the 904 remaining, 76 (8.4%) had 82 CNS complications. Results. The most common manifestations were seizures (in 50.6% of the CNS episodes), altered states of consciousness, and motor deficits (in 47.5% of the episodes each). CNS complications were caused by infections (26.8%), toxicity (25.6%), neoplasma (13.4%), vascular (10.9%) and metabolic disturbances (8.5%). In 14.6%, the mechanism remained unclear. 23.7% of the patients died from the CNS event. Neoplastic disorders had the worst (50%) while metabolic the best (0% mortality) prognosis. Imaging techniques were the most effective diagnostic measures, followed by laboratory analysis, clinical examination and CSF analysis. A neuro-psychological (CBCL, CFT-1 / -20 – testing) examination could be done in 21 of 32 long-term survivors. 7 had a major, 3 minor neurological impairment, 11 were normal in all tests. Conclusions. These data show that there is not one typical CNS complication, but a wide variety. There is no close connection between either underlying disease or symptoms and cause of the complication. Prognosis is variable. About two thirds of the long-term survivors could lead a normal life.