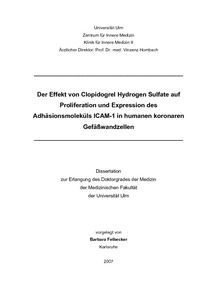 The study investigates the effect of Clopidogrel (C) on expression of intercellular adhesion molecule-1 (ICAM-1) and proliferation in human coronary vascular cells. The clinical relevance of the data is (theoretically) evaluated by the use of a SI/MPL-ratio, describing the relation between a significant inhibition in vitro (SI) and the maximal plasma level in vivo. Methods: Expression of ICAM-1 was studied in human umbilical vein endothelial cells (HUVEC), human coronary endothelial cells (HCAEC), and human coronary smooth muscle cells (HCMSMC) by cytoflow analysis (BDFACS Calibur) after incubation with C for a period of 18 h in concentrations of 0.00025, 0.0025, 0.025, 0.25, 2.5, 25 µg/ml. Expression of ICAM-1 was stimulated for a period of 6 h by adding of TNF-alpha (20 ng/mL). Cell proliferation was evaluated in HUVEC, HCAEC, and HCMSMC in cell culture studies by cell count after incubation with C for a period of 6 d in concentrations of 0.00025, 0.0025, 0.025, 0.25, 2.5, 25 µg/ml. Results: C in concentrations from 0.00025-25 µg/ml had no effect on ICAM-1 expression in HUVEC, HCAEC, and HCMSMC. In HCAEC a significant inhibition of cell proliferation was determined even at very low concentrations of C of 0.00025 µg/ml. In HUVEC the smallest concentration of C with a significant antiproliferative effect was 2.5µg/ml. In HCMSMC a significant antiproliferative effect was detected after adding of C in a concentration of 25 µg/ml (SI/MPL-Ratio = 9.62). Conclusion: There was no significant effect of C on ICAM-1 expression in any of the studied cells (HUVEC, HCAEC, HCMSMC). SI/MPL-ratio´s <1 in HCAEC and HUVEC demonstrates that the antiproliferative effect of C might occur even after oral administration. A SI/MPL-ratio >1 in HCMSMC implicates that the antiproliferative effect can not be achieved by oral administration. The use of C in drug eluting stents (DES) should be evaluated in future studies.