Specification of the orthogonal axes in Xenopus laevis: Maternal and zygotic genes involved in patterning the dorsal axis 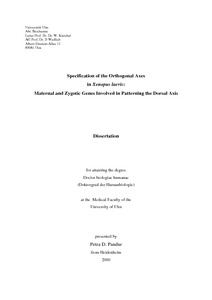 Part I of the dissertation focused on (1) the identification of maternal dorsalizing RNAs that are localized within the animal hemisphere along the dorsal-ventral axis at the 16-cell stage and (2) the determination of their post-transcriptional activation mechanism. An RT-PCR screen to investigate the differential expression of known maternal dorsalizing factors revealed the localized accumulation of XWnt8b transcripts in ventral animal midline blastomeres. This finding is interesting since XWnts have been shown to induce secondary axis formation when ectopically expressed on the ventral side before the onset of zygotic transcription (MBT). Overexpression of XWnt8b in dorsal animal midline blastomeres inhibited their ability to autonomously elongate, implicating that XWnt8b counteracts an intrinsic dorsal program of these blastomeres. However, the mere localization of XWnt8b transcripts does not predict protein distribution and therefore, the time point at which these transcripts are in the translatable RNA pool needs to be determined carefully. In addition, cytoplasmic polyadenylation was demonstrated to be the post-transcriptional activation mechanism of dorsalizing RNAs located in dorsal animal midline blastomeres at the 8- to 16-cell stages. For the identification of possible novel dorsalizing RNAs that are localized to dorsal animal midline blastomeres (D1.1), a D1.1 plasmid cDNA library was constructed and dorsalizing messages were screened by sib selection. This process led to the isolation and identification of two partial cDNA clones that displayed an interesting embryonic expression pattern. Clone Z is expressed in specialized ciliated cells in the epidermis. Zygotic expression of clone G is detected in the cement gland during early tail bud stages and becomes restricted to neural structures such as cranial ganglia and Rohon-Beard sensory neurons at later developmental stages. Sequence analyses of the partial clone did not reveal any homologies to known genes and therefore, clone G could be a novel factor involved in neural development. Part II of the dissertation focused on the characterization of the previously unknown Xenopus homeobox transcription factor XSix1, whose embryonic expression pattern implicates a role for this gene in the establishment of the embryonic field that gives rise to head sensory organs and the lateral line system in fish and amphibians. It shares a high degree of sequence homology with mouse and human Six1 but, unlike these genes, XSix1 is prominently expressed in ectodermal tissues during early developmental stages. XSix1 is highly expressed in the neurogenic cephalic placodes: olfactory placodes, dorso-lateral and epibranchial placodes consisting of the auditory and trigeminal placodes and the preauditory, glossopharyngeal and vagus placodes and their associated lateral lines. XSix1 expression is upregulated by the neural inducers Noggin and Cerberus, and by the head placodal transcription factor Pax6. During early development XSix1 is barely detectable in mesoderm, in contrast to its mammalian counterparts. However, transcripts of XSix1 can be detected in embryonic and adult skeletal muscle by RT-PCR, and it can induce the expression of myogenin. Thus, the function of Six1 in Xenopus has an early component that has not been well-elucidated in mammals, and although it shares high sequence identity with its mammalian homologues, its common activity in muscle development seems to be a later developmental event.