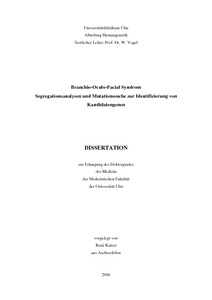 Exclusion of genes from the EYA-SIX-DACH-PAX pathway as candidates for Branchio-Oculo-Facial Syndrome (BOFS). Recent reports have shown that mutations in EYA genes (eyes absent) or SIX genes (sine oculis) may contribute to disorders, which are characterized by defects in the development of eyes, ears, the derivatives of branchial sinuses, and the kidneys. The EYA-SIX-DACH-PAX gene pathway summarizes a few genes, which are crucial for appropriate embryonic development. It was the aim of this study to look for putative candidate genes for Branchio-Oculo-Facial syndrome (BOFS; OMIM 113620), a developmental disorder, which had been proven being distinct from the related syndromes Branchio-Otic (BOS1-3; OMIM 602588; 120502; 608389) and Branchio-Oto-Renal (BORS; OMIM 113650). Since mutations in SIX/EYA genes have been published to contribute to the BOS/BOR phenotype, we have analyzed the inheritance of markers of these genes and other members of the EYA-SIX-DACH-PAX interactive network in the largest family with BOFS. All experiments have been performed by fragment analysis with fluorescence-labeled primers and/or sequencing of putative candidate genes. Here, we show for the first time the exclusion of many genes of the above-mentioned pathway. In a previous report the members of the EYA gene family were already rejected as candidates for BOFS. We have now excluded members of the sine oculis gene family, namely SIX1, SIX2, SIX4 and SIX6. Further, FGF3, HOX11, IRF6, and FOXC1 were excluded. The members of the POU transcription factors gene family POU4F3 and POU3F4 were rejected by their segregation pattern or the X-chromosomal localization, respectively. DACH2 and PITX2 were excluded as well as the paired box genes PAX2 and PAX8. We draw the preliminary conclusion that the pathogenesis of BOF syndrome might rely on genes different from those genes members of the EYA-SIX-DACH-PAX network.