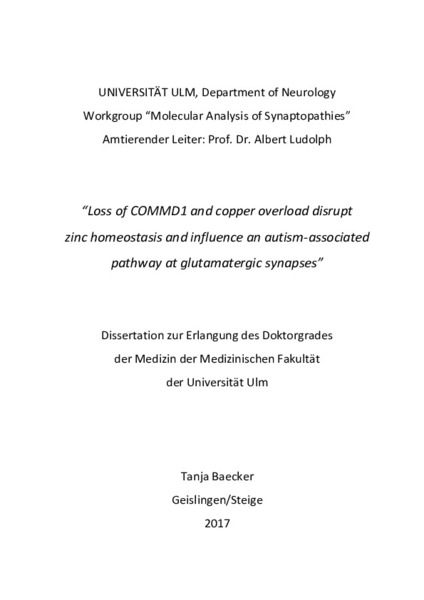 Autism spectrum disorders (ASD) are a heterogeneous group of neurodevelopmental disorders. Several mutations/deletions that have been found to be associated with ASD can be placed in a common synaptic pathway at excitatory glutamatergic synapses. Among them are mutations/deletions in genes coding for proteins from the ProSAP/Shank (proline-rich synapse-associated protein/Src homology 3 domain and ankyrin repeat-containing) family, which are important scaffold proteins at excitatory glutamatergic synapses. ProSAP/Shank proteins build platforms at the postsynaptic density (PSD), which are stabilized with the help of zinc. Zinc and copper have antagonistic roles in the body and also influence each other’s absorption. Extracellular copper overload influences the uptake of zinc and therefore intracellular zinc levels in vitro. Furthermore, zinc-dependent upregulation of zinc-sensitive proteins like ProSAP1/Shank2 and ProSAP2/Shank3 is impaired by copper overload in vitro. Increased levels of copper might lead to a generally reduced bioavailability of zinc as in vitro they impair the usual increase of synaptic ProSAP1/Shank2 and ProSAP2/Shank3 due to neuronal activity. Acute copper overload in vivo results in zinc deficiency in the brain, above all in hippocampus. However, the brain is protected by the blood-brain-barrier from copper overload. In adult mice copper overload shows little influence on synaptic proteins in the whole brain, but it can lead to a decrease of ProSAP2/Shank in hippocampus. Prenatal copper overload also leads to zinc deficiency in the brain in vivo. This in turn results in a decrease of ProSAP1/Shank2 and all ProSAP2/Shank3 isoforms. Moreover, the reduced level of ProSAP1/Shank2 on protein level seems to be based on both, a slight decrease in number of synapses and a weaker scaffold of synapses especially in synapses with a strong ProSAP1/Shank2 PSD scaffold, which are probably mature synapses. This also indicates that there exists a critical developmental time window for the effects of copper on the ASD associated pathway. COMMD1 (Copper- metabolism gene MURR1-domain; MURR1: mouse U2af1-rs1 region 1), which is expressed in adult mice and also during CNS development, plays an important role in copper excretion and it has been found to be homozygous deleted in some ASD patients. Knockdown of COMMD1 leads to intracellular copper overload and zinc decrease in vitro which in turn results in a decrease of ProSAP1/Shank2 and ProSAP2/Shank3 when there is enough zinc and copper available compared to COMMD1 overexpression. Therefore, COMMD1 can be seen as a member of the common synaptic pathway at excitatory glutamatergic synapses that was mentioned before. This pathway is also influenced by environmental factors like zinc or other metal ions like copper that in turn affect zinc homeostasis.