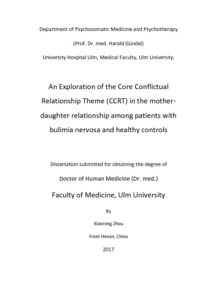 The parent-child relationship, especially between mothers and daughters, is repeatedly proven in previous research as a crucial factor in the development and symptom maintenance of bulimia nervosa. This thesis attempts to answer mainly three questions: 1. Do patients with bulimia nervosa have more interpersonal problems, especially in the relationship with their mothers, than controls? 2. Compared to controls, what are the most distinctive relationship patterns of the daughters with bulimia nervosa based on their descriptions of their interactions with their mothers? 3. How are the associations between those relationship conflicts and the psychological distress and eating disorder symptoms of bulimic patients? This study has explored the mother-daughter relationship conflicts with a combination of qualitative and quantitative methods. 30 female patients with diagnosis of bulimia nervosa, and 30 controls, who are free from any eating disorders and comparable in the aspects of age and education level were recruited in the study. The participants in both groups were interviewed with a semi-structured qualitative Interview, the Adjective Interview on Relationships, which was later coded with the Core Conflictual Relationship Theme-LU (CCRT-LU). A set of questionnaires were applied to both groups: the Symptom checklist-90 Revised (SCL-90-R), the Eating Disorder Inventory-2 (EDI-2), the Family Environment Scale and the Experience of Close Relationships-Relationship Structures Questionnaire (ECR-RS). Additionally, in order to evaluate the severity of the eating pathology, a clinical diagnostic questionnaire, Eating Disorder Examination-Questionnaire (EDE-Q) was applied to the patient group with bulimia nervosa. The patients with bulimia nervosa showed significant higher psychological distress such as anxiety, depression, and hostility in SCL-90-R, which are significantly correlated with the relationship experiences in the mother-daughter relationship (superclusters ABC: loving, EFG: weak, and KL: fighting in the R dimension: dimension of reaction of CCRT-LU analysis). Those superclusters in different dimensions correlated as well significantly with the characteristic features of bulimia nervosa in EDI-2 in both groups, and with core symptoms measured with EDE-Q in the patient group. In respect to the family environment, the patients reported in the FES a rigid, full of control but lacking emotional cohesiveness environment. The experiences of the parental relationship indicate that a greater percentage of the daughters with bulimia nervosa may have an insecure attachment pattern with significant higher scores in both anxious and avoidance dimensions in ECR-RS than their counterparts in the control group. In the CCRT-LU analysis, patients with bulimia nervosa generally used fewer words from harmonious categories in their descriptions of the mother-daughter relationship interactions than controls. Fathers are perceived by the patients with bulimia nervosa as cold and distancing in the analysis of adjectives, while mothers as unsupportive, anxious, rejecting and distancing. For wishes (W), the most common wishes from all the participants were “to be loved by the mother”. The discrepancy of wishes between the two groups suggested the pseudo-autonomic feature of the daughters with bulimia nervosa. For reactions (R), the central relationship conflictual theme of the mother-daughter relationship can be summarized as, the weakness and anxiety of the mother not only limit their capability to support and love their daughter, but also calls for the reverse care from their daughters. The daughters receive through this reverse care of the mothers both emotional stress and benefits. To cope with the stress, they developed pseudo-autonomic behaviors and emotional suppressions as their coping strategies, but it is not enough. The psychological decompensation in the stress situation may be highly associated with their impulsive eating symptoms, such as bingeing. Later, by applying a discriminant analysis with jackknife resampling procedure, the mothers’ personality features (loving and self-determined in the control group vs. weak and anxious in the patient group), as well as the daughters’ responses (reverse care with stress as well as benefit in the patient group and the loving, but also with anger and impatience response in the control group) were identified as the most crucial factors to separate the patients with bulimia nervosa from the controls. The discriminant function for this model with four factors reached 83.3%. Moreover, in the comparison of the additional classifications, mothers’ interferences, especially about appearance or eating differed significantly between the two groups. Daughters in the patient group show a distinctive reverse care tendency towards their mothers.