Effects of thoracic trauma on in vitro efferocytic and phagocytic activity of alveolar macrophages under normoxic, hypoxic and hypercapnic conditions 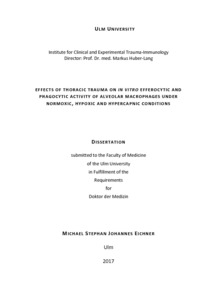 Blunt trauma to the thoracic area is frequent and directly responsible for 20-25% of all trauma deaths. Even mild trauma to the chest can cause severe local and systemic inflammatory alterations. Alveolar macrophages (AM) are the lungs first line of host defense and play an important role in overcoming the effects of blunt chest trauma (TxT). Firstly, AM were examined after intra-tracheal instillation of polymorph nuclear neutrophils (PMN) and Escherichia coli (E. coli) post-trauma. AM were also examined in consideration of their capacity after previous ingestion of apoptotic PMN (aPMN). Secondly, efferocytosis, phagocytosis and mediator release of post-traumatic AM were analyzed in vitro under normoxic, hypoxic and hypercapnic conditions. Male CD rats were subjected to blunt chest trauma by a one 'hit' single blast wave. For intra-tracheal instillation, PMN were harvested from untreated donor rats. After labeling the PMN with DiD, the apoptosis was induced with UV radiation. E. coli or aPMN were then instilled into the lungs 2, 24 or 48 hours (h) after trauma or sham treatment. Two hours after instillation, rats were sacrificed. After trauma the percentage of AM ingesting aPMN remained unchanged. In contrast, the post-traumatic amount of AM ingesting E. coli was significantly increased 24 h after trauma and remained elevated in vivo. To verify, if these effects are attributable to the influences of decreased oxygen or elevated carbon dioxide levels post-trauma, AM were isolated 2, 24 or 48 h after induced trauma or sham treatment via bronchoalveolar lavage (BAL). The harvested AM were cultured per se, with aPMN or E. coli and then incubated under normoxic (21% O2, 5% CO2), hypoxic (5% O2) and hypercapnic (20% CO2) conditions for 2 h. After incubation, AM were analyzed using flow cytometry. To examine the mediator response, culture supernatants were analyzed in immunology multiplex assay. TxT did not alter the AM efferocytosis of aPMN in vivo, when compared to sham procedure. This result was reproduced in vitro during normoxia and hypoxia. Hypercapnic conditions partially increased aPMN efferocytosis. Phagocytosis of E. coli in turn, was significantly increased by blunt chest trauma in AM in vivo and in vitro. Hypercapnia down regulated phagocytosis in AM significantly by CO2 dependent induction of anti-apoptotic factor expression. Hypoxia did not alter phagocytosis in AM. Blunt chest trauma significantly up regulated the mediator release in AM compared to respective sham groups. Maxima in mediator release were reached 24 h after trauma. Hypoxia and hypercapnia had various effects on AM mediator release. In our studies, incubation at low oxygen levels did not alter the efferocytic or phagocytic capabilities of AM, but influenced its mediator release significantly. AM co-incubated with and without aPMN have shown a significantly increased TNF-α release. AM stimulated with LPS in turn showed a lowered release in TNF-α. Other pro-inflammatory mediators, such as IL-1 β, IL-6 and MCP-1 were mostly suppressed by the influence of hypoxia during aPMN and E. coli ingestion. Hypercapnia altered the efferocytic and phagocytic capabilities of the lung's primary defense cells. Elevated CO2 levels promoted the efferocytosis of aPMN, but suppressed the phagocytosis of E. coli. Hypercapnia markedly suppressed the release of TNF-α and MIP-1-α, as well as IL-6, GRO/KC and MCP-1 during E. coli ingestion and incubation without phagotropic nutrition. Levels of IL-10 were increased under the influence of elevated CO2. In conclusion, hypercapnia revealed anti-inflammatory influences on AM after trauma in vitro. There is growing evidence that hypercapnia may itself minimize or reduce lung injury as a result of suppressing inflammatory events and may be used as a therapeutic strategy, but the impaired bacteremic clearance by AM might increase the risk for lung infections.