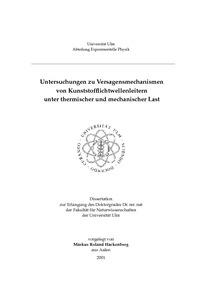 The aim of this study was to investigate the influence of mechanical treatment such as bending and stretching and of thermal heat on the optical properties of polymer optical fibers. Elongation of the core of the fibers lead to a break while tension was between 85 MPa and 110 MPa depending on the producer. With coatings around the fiber, the fiber broke with a tension of only about 35 MPa. This happens due to a stabilization of the core by the coatings so the core can be elongated up to 30 percent over its intrinsic break point. The optical properties of the fiber get better at the yield point since internal tensions can be reduced and the material is getting more homogenous. By elongating the fiber more than 65 percent not only scattering but also absorption appears. Against bending the polymer optical fibers are very resistant. Bending radii greater 10 mm show no effect in the ability to guide light, with smaller bending radii the fibers show an increased loss independent of the wavelength. A dependency on the bending angle Phi was found for the increase: loss proportional to cos(Phi); this implies the greatest loss in the former straight direction. Softer coatings of the fibers improve the bending performance. The coating is also very important in case of the durability under high temperature. The coated fibers indicate a higher loss at low wavelength, but without coatings the fibers show an increase in optical attenuation even at higher wavelength. Tapes decrease the fibers attenuation even more. Even after 4000 h storing at temperatures of 70 °C there is no increase of the attenuation at 650 nm wavelength, but at temperatures of 90 °C the fibers attenuation is increased 3 dB after 3400 h. Comparing the course of the increase in attenuation, one finds a factor 5.5 in time for almost identical attenuation curves. Taking into account WLF-equation the activation temperature follows to be around 329 K.