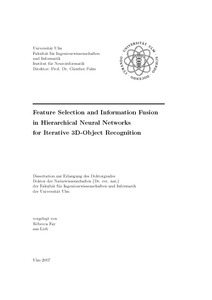 This work offers a novel approach for solving muti-class object recognition problems by dividing the complex task into several hierarchically structured sub-problems that are easier to solve. The work at hand covers several aspects of object recognition with hierarchical neural networks: 1. Generation of appropriate classifier hierarchies; 2. Evaluation of hierarchies (information fusion); 3. Selection of suitable features for the classification; 4. Extensibility/adaptivity of the hierarchies; 5. Generation of similarity preserving sparse binary codes. The selection of suitable feature types for the classification of objects from various domains is an important aspect for the recognition of three-dimensional objects. In the context of this work diverse feature types were deployed and evaluated. Different strategies for the retrieval of the combined classification result from the classifier hierarchies were developed and evaluated. The most promising approaches were the retrieval strategy similar to decision trees, the retrieval strategy utilizing the Dempster-Shafer evidence theory as well as the retrieval strategy utilizing similarity preserving codes and inter-state decision templates. The generation of similarity preserving sparse binary codes is an additional aspect of the object recognition with hierarchical neural network classifiers. Within the scope of this work several strategies for the generation of such codes based on the activation of the neural classifiers within the hierarchy were developed and evaluated. Another focus was the incremental learning of hitherto unknown objects. In complex real-world environments this is an often desirable capability as the confrontation with so far unfamiliar objects is very likely. Within the scope of this work a method for subsequently learning new objects in an efficient manner without negatively influencing the classification performance of previously learnt objects.