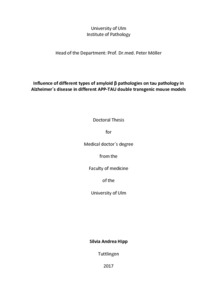 Although Alzheimer´s disease (AD) was first described already in 1907, until today the exact pathomechanisms of the disease are not fully understood. Amyloid β (Aβ) is thought to interact with and influence tau pathology but it is not clear how such an interaction takes place. The aims of this study were to find out more about the influence that different types of Aβ pathologies may have on tau pathology in AD. Therefore, amyloid precursor protein (APP) and tau double transgenic mice were examined. APP23xTAU58/2 mice were selected, because APP23 mice are the only APP transgenic mice presenting with loss of neurons even in the single transgenic APP23 mouse. Harbouring human APP with the Swedish mutation (670/671 KM→NL) they produce significant amounts of Aβ. In APP51/16xTAU58/2 mice human wild type APP is overexpressed, these mice produce less Aβ than APP23xTAU58/2 mice. To see the effects of intracellular Aβ on tau pathology, APP48xTAU58/2 mice were chosen with APP48 mice being known to produce intracellular Aβ. Tau pathology in the mouse brains was visualised by immunohistochemical stainings with antibodies against abnormal phosphorylated tau protein, 3-repeat and 4-repeat tau protein. APP23xTAU58/2 mice showed more tau pathology than the other mouse models, presenting with higher numbers of neurons containing aggregated, hyperphosphorylated tau protein. Enzyme linked immunosorbent assay (ELISA) analyses were performed to measure the content of total and phosphorylated tau protein. Here, no difference was seen in the amount of phosphorylated tau among the different mouse models, whereas the mice harbouring the tau transgene showed higher levels of total tau than mice without tau transgene. This showed that APP23xTAU58/2 mice do not differ in the amount of phosphorylated tau from the other APPxTAU58/2 mouse models, but in the neuron specific pathological aggregates and phosphorylation of tau protein as represented by the number of pretangles and neurofibrillary tangles. To clarify, which forms of Aβ might be responsible for exaggerating tau pathology, western blot analyses with the 6E10 antibody raised against Aβ1-17 of different fractions of brain homogenates were performed. Herewith, it was seen, that APP23xTAU58/2 mice show more Aβ in the soluble fraction than the other mouse models. APP51/16xTAU58/2 mice expressing human wildtype APP and producing less Aβ than APP23xTAU58/2 mice exhibit lower number of neurons containing hyperphosphorylated and aggregated tau protein than APP23xTAU58/2 mice but more than TAU58/2 and APP48xTAU58/2 mice also showed lower levels of soluble Aβ than APP23xTAU58/2 but higher than APP48xTAU58/2 and TAU58/2 mice, indicating that the Aβ induced increase of tau pathology takes place in a dose dependent manner. Western blot analyses of soluble brain fractions after immunoprecipitation for oligomers, protofibrils and fibrils did not show relevant amounts of fibrillary or oligomeric Aβ in none of the mouse models, indicating that the critical Aβ species was associated with monomers or low molecular weight oligomers. APP23 mice have already been described to show only very little tau pathology. This suggests that a prerequisite for soluble Aβ to aggravate tau pathology is the presence of low levels of abnormal tau protein aggregates for initiating the process of tau pathology. The potential site of interaction of Aβ and tau are the synapses, where tau can be released into the perisynaptic extracellular space where it may interact with extracellular Aβ. Further, Aβ can cause tau phosphorylation by modulating synaptic receptors and activation of kinases. Tau itself supports these mechanisms. These possible interactions between Aβ and tau at the synapses as well as coseeding effects might represent a key event in the pathogenesis of AD, explaining the parallel expansion of Aβ and tau pathology in the pathogenesis of AD as seen in human brain autopsy studies.