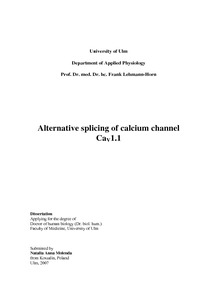 Alternative splicing is likely to be the primary source of human proteomic diversity. Our aim was to investigate the splice variants of the human CACNA1S gene. The encoded voltage-gated calcium channel CaV1.1 is mostly expressed in skeletal muscle cell, where it controls the activity of intracellular calcium realize channel RyR1, during excitation-contraction coupling. We extracted RNA from human muscle and human myotubes cell culture, performed reverse-transcriptase PCR and direct sequencing of all variants found. We identified 13 different splice variants: 9 generating premature truncations and 4 generating putatively functional channels. Premature truncation could have three different consequences for CaV1.1 channel: nonsense-mediated decay (NMD), leaky ribosomal scanning, or dominant-negative calcium channel suppression. We focussed on splice variant excluding exon 29 (DELTA-29). This region codes most of IVS3-S4 loop. The IVS3-S4 region is subjected to extensive splicing in multiple calcium channels genes and different species from Drosophila to human. Variant without exon 29 is highly expressed in human and mouse myotubes (~ 70 % of transcripts), but relatively rare in adult muscle (~ 10 % of transcripts). For this reason, we undertook functional studies of this variant. Combined whole cell patch clamp and intracellular fluorescence Ca2+ measurements were performed in transfected GLT myotubes loaded with the fluorescent Ca2+ indicator Fluo-4. Current kinetics of wild type and DELTA-29 were clearly different, the I-V curve of the variant was - 32 mV shifted. Our results are nicely consistent with findings in other homologous calcium channels: There appears to be a correlation between the IVS3-S4 linker length of and the amount of hyperpolarizing shift in the voltage dependence of activation when compared with the WT. Alternative splicing of exon 29 appears to underlie the key shift in voltage parameters. Our research provided valuable evidence on the dominant expression of DELTA-29 channels in neonates and regenerative muscles. It also provided further evidence for phenotypic variation generated by alternative splicing to produce proteomic diversity.