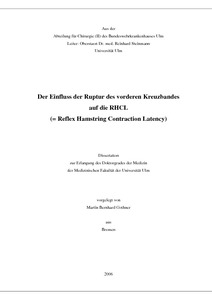 A rupture of the anterior cruciate ligament (ACL) usually leads to sensorimotor impairment of the thigh muscles that stabilize the knee. The purpose of this study was to quantitatively assess reflex activity in the hamstrings after anterior tibial translation in 21 patients with isolated ACL ruptures. The patients were also divided into a group with "giving way" symptoms (non-copers, n = 12) and a group without "giving way" symptoms (copers, n = 9). While the patients were standing upright with 30 ° knee flexion, a force of 300 N was applied to the knee in order to induce posterior-anterior tibial translation. Hamstring activity was measured using surface electromyography (EMG). A linear potentiometer was placed on the tibial tuberosity and measured maximum tibial translation under functional conditions. In addition, knee laxity was assessed with a KT 1000 arthrometer under passive conditions. After ACL rupture, the short latency response (SLR) remained unchanged (p = 0.21), whereas the medium latency response (MLR) was significantly longer (p < 0.001). Whereas similar SLRs were measured for copers and non-copers, significantly longer MLRs were noted for both groups (p < 0.01). Significant differences between healthy and injured legs were noted after tibial translations under both functional and passive conditions (p < 0.001). Mechanical knee instability was found to be unchanged between copers and non-copers (KT 1000: p = 0.97; tibial translation: p = 0.31). These results show that ACL rupture is the cause of sensorimotor impairment that leads to "giving way" symptoms. An altered stretch reflex of the hamstring muscles (MLR) in the injured leg was noted. Mechanical instability, by contrast, does not influence subjective knee instability.