Why knowledge is relevant in real-world settings : innovative approaches to examine the knowledge-is-power hypothesis 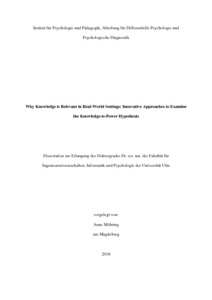 Domain-specific knowledge contributes to individual differences in many cognitive tasks. Research suggests that the underlying mechanisms might best be described with the knowledge-is-power hypothesis, claiming that prior knowledge facilitates the acquisition of new knowledge. However, investigations of this effect are often restricted to narrow low-stakes settings. This thesis aims to examine the knowledge-is-power hypothesis in more naturalistic and educational settings. First, the influence of domain-specific knowledge on comprehension of new information was tested with an innovative assessment capitalizing on the internet. In order to investigate individual differences in digital literacy, test-takers were presented with health-related comprehension problems. Instead of reading a given text, they were instructed to search the internet for the information required to answer the questions. The relationship between this newly developed test and fluid and crystallized intelligence was investigated, while controlling for computer usage. Prior knowledge strongly influenced digital literacy. Together with fluid intelligence digital literacy could be explained exhaustively while computer usage did not add to the variance explained. A crucial time for learning processes and knowledge acquisition is the transition from school to work. Despite the relevance of this transition period, studies about the prediction of educational performance in vocational schools are scarce. Knowledge acquisition in vocational education and training (VET) was be predicted by cognitive abilities such as knowledge and reasoning as well as the non-cognitive construct of typical intellectual engagement. Differences in domain-specific knowledge were predicted for different stages of VET (1st year, 2nd year and 3rd year) and in distinct vocational domains. Crystallized intelligence emerged as the strongest predictor for all vocational domains and at every stage of VET while reasoning showed moderate to weak effects and typical intellectual engagement did not add to the variance explained at all. Overall, the knowledge-is-power hypothesis is supported even in broader and more naturalistic settings but seems to depend on several conditions such as the distinction between typical behavior and maximal effort and the constraints on the testing situation.