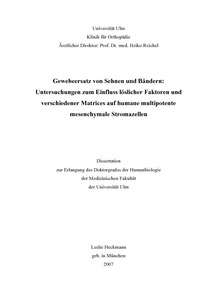 Tendon and Ligament are essential part of the musculoskeletal system. Upon rupture of the cruciate ligaments, no spontaneous healing occurs. Therefore, the aim of this study was to evaluate the potential use of human Multipotent Mesenchymal Stroma Cells (MSC) and their differentiation towards a phenotype of Tenocytes (TC) in contact with different biomaterials for Tissue Engineering of tendon and ligament. A reference system consisting of a TC-seeded collagen type I-gel was characterized. The results of two culture systems with MSC were compared with the TC-model. MSC were cultured within the collagen gel and within a Poly-L-Lactide matrix (PLLA). Effects of TGFß-1, PDGF-bb and BMP13 were evaluated. Adhesion, proliferation and matrix metabolism were tested. Cell-matrix-interactions were characterized using Anti ß1-Integrin. Gene expression was evaluated with PCR techniques. Protein expression was determined by immuno histochemistry and zymography. Cells contracted the collagen matrices constantly during cultivation time. Contraction was abolished by addition of Anti-Integrin. Proliferation rates were between 60-80%. TC reduced collagen type I synthesis after introduction into the collagen gel, expression by MSC was slightly enhanced by 3D cultivation. Collagen type X was upregulated by TC and induced by MSC. On PLLA, expression of collagen type X was increased by TGFß-1. Increase in TenascinC expression was found in contracting collagen gels, not in the presence of Anti-Integrin or on PLLA. Integrin alpha-2 also was increased in collagen, but not on PLLA. Matrix degradation by MMPs was influenced by the biomaterial, too. MMP-1 was increased, MMP-13 induced in the collagen gel. Activation of MMP-2 was only found in collagen gel. The selection of the biomaterial and its adhesion conditions are critical parameters in Tissue Engineering influencing matrix synthesis and degradation. A modulating effect resulting from the presence of growth factors was detected.