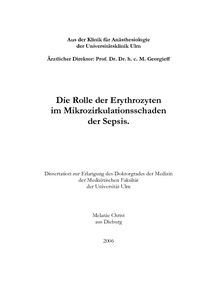 Changes in red blood cell (RBC) rheology affect their clearance from the circulation. We investigated the effects of endotoxin and sepsis on intravascular erythrocyte survival and elimination in various organs in healthy (G) and septic (S) awake rats. Rats were randomized to 3 healthy and 3 septic groups. G/KON and S/KON received transfusions of naive RBC, G/ETX and S/ETX received endotoxin-treated RBC and G/CLP and S/CLP received RBC from septic donor rats. Sepsis was induced by cecal ligation and perforation. For transfusion, blood was harvested from healthy and septic donor rats or naive RBC were incubated with 75µg/ml endotoxin for 2 hrs. RBC were labelled with 51Cr, resuspended to the hematocrit of the recipient rat and 8 ml of blood were then exchanged simultaneously. Blood samples were taken to detect RBC survival. Cardiac output, temperature, mean arterial and central venous pressure were measured before and 4 hrs after transfusion. Organ blood flows were assessed by radiolabelled microspheres. Transfusion of naïve or septic RBC in healthy or septic rats did not affect hemodynamics including regional blood flows. Transfusion of septic RBC in healthy rats resulted in a higher entrapment of these cells into liver and spleen as compared to naïve RBC. In septic animals, there was no difference in elimination of naïve or septic RBC. Entrapment of naïve RBC into the septic spleen was about 50% that of naïve RBC into the healthy spleen. In conclusion, sepsis induces RBC changes which promote their clearance from the circulation. Septic RBC are predominantly cleared by liver and spleen, as organs of the reticuloendothelial system (RES). Clearance of RBC from the circulation is not only determined by alterations of the RBC itself but also appears to depend on host factors. Sepsis is associated with a decreased capacity of the RES to clear RBC. The combination of RBC alteration and compromised RES in sepsis may further aggravate the septic microcirculatory injury.