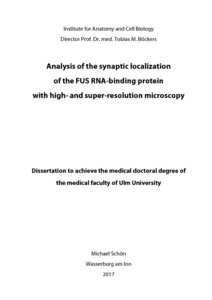 Conformational diseases are devastating disorders and are accompanied by an irrevocable decay of neurons. Albeit the phenotypes vary in form of dementia, movement disorders, and behavioral abnormalities, the core histopathological finding in these diseases is the self-propagating accumulation of proteins in neuronal cells. Amyotrophic lateral sclerosis (ALS) and frontotemporal dementia (FTD) share the same underlying genes and properties of the protein accumulations. Along these lines, both diseases are currently considered as phenotypical variants of the same disorder. The majority of the involved accumulation-prone proteins exhibit two significant characteristics: 1.) they are part of the ribonucleic acid (RNA) processing machinery, and 2.) they form large protein accumulations in diseased states. Among these proteins, fused in sarcoma (FUS) is an abundantly expressed RNA-binding protein with an ample list of known and in part assumed functions. FUS is integral in several steps of the nuclear and extranuclear RNA metabolism. It is also believed that FUS is able to orchestrate local translation. In ALS, most FUS mutations lead to a cytoplasmic mis-localization of the otherwise preponderantly nuclear protein. Two major, but contradictory mechanisms are favored to explain the pathological effects of FUS mis-localization: 1.) a loss-of-function mechanism in the nucleus and / or 2.) a toxic gain-of-function in the cytoplasm. To date, it is an unanswered question, which of these processes is dominant in the pathogenesis. Previous studies have shown that FUS is not confined to the nuclei in neurons but can also be found at synaptic sites. The most likely distribution was consistently assumed to be in dendrites and in postsynaptic compartments. The aim of the study is to further scrutinize synaptic FUS in the central nervous system of mice with state-of-the-art imaging technology. By employing laser-scanning confocal microscopy, histological sections of various areas of the mouse central nervous system were analyzed. After immunolabeling of FUS in combinations with synaptic markers, it was demonstrated that FUS is abundantly expressed at synapses and localizes to excitatory, glutamatergic synapses in all investigated brain regions, namely, the cortex, the archicortex, and the molecular layer of the cerebellar cortex. Of note, mossy fiber boutons in the hippocampus and axosomatic non-glutamatergic synapses at alpha-motoneurons exhibited vast amounts of synaptic FUS. In contrast, FUS-containing axosomatic synapses in the spinal cord are negative for classic markers of glutamatergic synapses. This specificity toward different synapse subtypes in the brain versus the spinal cord might be interlinked with the distinct but overlapping phenotypes in FUS-related ALS and FTD. A further thorough investigation followed in cultured neuronal cells derived from rat embryonic hippocampi. By co-immunolabelings of different synaptic markers, FUS was found to be predominantly affiliated to excitatory, glutamatergic synapses with less association to inhibitory synaptic contacts. In order to unravel the precise localization of FUS at synapses, super-resolution microscopy was employed. This approach was required due to the proximity between the pre- and postsynaptic compartments, which are below the resolution limit of conventional fluorescence light microscopy. Initially, stimulated emission depletion (STED) microscopy was employed, while an in-depth analysis was conducted with direct stochastic optical reconstruction microscopy (dSTORM). Initially, a staining protocol could successfully be established. In a statistical approach, the axial distributions of FUS and of classical pre- and postsynaptic markers were determined. Thus, FUS could be localized to presynaptic terminals adjacent to the presynaptic active zone and largely overlapping with excitatory synaptic vesicles on a nanometer-scale. Thereby, immunolabeled synaptic proteins in primary hippocampal neurons could be displayed in unprecedented resolution. The present study displays a comprehensive description of the synaptic distribution of FUS in crucial areas of the mouse central nervous system. Furthermore, by employing state-of-the-art super-resolution microscopy techniques, a precise anatomical localization of FUS at presynaptic terminals could be determined. The results pose pivotal implications for future investigations. It will be most intriguing whether FUS regulates local translation in presynaptic terminals, and whether this function is affected in diseased states. FUS might be in the cross-hair of local protein production at excitatory synapses, which might be connected to the vulnerability of certain synapses in pathological states of FUS. Finally, a presynaptic localization might be connected to the postulated mechanism of trans-synaptic propagation of protein accumulations in FUSopathies, which might explain the observed spreading of the disease pathology along neuronal circuits.