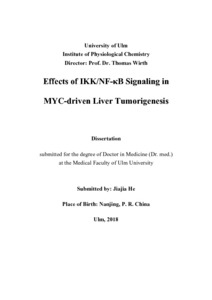 Introduction The MYC oncogene appears to be critically involved in the pathogenesis of HCC. The role of NF- κB in liver cancer is complex, either acts as a tumor-promoter or tumor-suppressor in liver carcinogenesis. However, the role of NF- κB in MYC-induced liver carcinogenesis has not been reported. In the present study, we have generated a mouse model of MYC-induced HCC with or without liver specific NEMO deletion. Our aim is to study the effect of inhibiting the IKK/NF-κB signaling in MYC-induced liver carcinogenesis. Material and Methods LAP-tTA mice were first crossed to Alb-cre transgenic mice. Double transgenic offspring were crossed to NEMOfl mice to obtain LAP-tTA+/Alb-cre+/NEMOfl/wt mice, which later were crossed with tetO-Myc+ mice. MYC expression was conditionally regulated by doxycycline (DOX) treatment. The combination of all these genetically modified mouse lines resulted in mice that expressed MYC in a liver-specific fashion (MYCLAP-tTA) and had deleted NEMO in liver parenchymal cells (NEMOΔLPC). Mice were analyzed at 35 days and 45 days old. Survival curve was plotted and compared. Serum liver enzymes were measured, and analysis was based mainly on histology, protein and gene expression levels. Results and Discussions Macroscopic analyses of the livers of mice with MYC overexpression revealed substantially enlarged livers with multiple visible tumor nodules. MYCLAP-tTA/NEMOΔLPC mice showed significantly reduced survival time than MYCLAP-tTA mice. A significant increase of AST, ALP, GGT and bilirubin levels were observed in MYCLAP-tTA/ NEMOΔLPC mice compared to MYCLAP-tTA mice. Unlike the solid tumor nodules present in the MYCLAP-tTA mice, the tumor nodules in the MYCLAP-tTA/NEMOΔLPC mice contained multiple cyst-like/glandular structures, positively stained for CK19, which have been described in human intrahepatic cholangiocarcinoma (ICC). MYCLAP-tTA/ NEMOΔLPC mice showed stronger proliferation, apoptosis and fibrosis and an upregulation of progenitor genes expression compared to MYCLAP-tTA mice. We found an activation of RAF/MEK/ERK pathway in MYCLAP-tTA/ NEMOΔLPC mice. 10 days DOX treatment could reverse tumorigenesis in MYC transgenic mice. Conclusion We showed that liver specific NEMO deletion together with MYC overexpression induce a mixed tumor type of HCC-ICC. Deregulation of the IKK/NF-κB signaling may be one of the possible triggers for the development of mixed HCC-ICC and therefore may act as a tumor suppressor in liver carcinogenesis. MYC-driven liver tumorigenesis is reversible by DOX treatment.