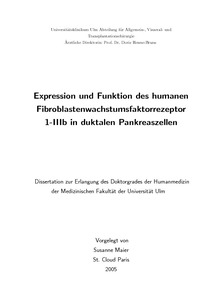 Human pancreatic ductal adenocarcinoma is a highly malignant disease with a very poor prognosis due to a lack of sufficient therapeutic options. Some observations indicate the important role of oncogenes, tumour suppressor genes and growth factors in its pathogenesis. Pancreatic carcinoma shows an overexpression of fibroblast growth factors (FGFs), which activate tumour progression by autocrine and paracrine loops. FGFs are a group of homologous heparin-binding polypeptides which signal via the according tyrosine-kinase-receptors (=FGFRs). In this study we characterized the expression and functionality of the human FGFR1-IIIb mRNA splice variant in pancreatic ductal cells and tissues. A cDNA encoding the human full-length 2,55 kB FGFR1-IIIb was expressed in a stable manner in well-differentiated TAKA-1 pancreatic ductal cells which are not expressing endogenous FGFR1 as well as in PANC-1 pancreatic carcinoma cells which are expressing little FGFR1. Immunoblot analysis of FGFR1-IIIb-expressing clones revealed that this FGFR is a glycosylated 110 kDa protein. MTT-assays evidenced that human FGFR1-IIIb is a functional receptor which enhances cell proliferation significantly after stimulation by FGF-1, -2 and -4. Further growth assays (MTT and soft agar) in complete medium with 10% FBS demonstrated that anchorage-dependent as well as anchorage-independent growth of TAKA-1 and PANC-1 is inhibited by the expression of FGFR1-IIIb. Growth inhibition is induced by still unknown signalling pathways. Our data demonstrate that human FGFR1-IIIb is a functional transmembrane FGF receptor expressed in the human pancreas and that several FGFs can exert mitogenic effects via FGFR1-IIIb. However, this receptor can also inhibit cell growth.