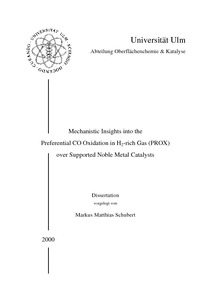 The mechanism of preferential CO oxidation in H2-rich gas (PROX) is investigated over three different catalyst systems: supported platinum (in particular Pt/gamma-Al2O3), a supported bimetallic catalyst (Pt3Sn/Vulcan) and supported gold (in particular Au/alpha-Fe2O3). Compared to standard Pt catalysts which require temperatures above 150°C to operate at reasonable rates, the latter low temperature PROX catalysts are characterized by a combination of facile oxygen adsorption and largely inhibited hydrogen adsorption under reaction conditions. This can be achieved either by an active material that is inert for both, hydrogen and oxygen adsorption, but allows CO adsorption, and where oxygen adsorption proceeds on the support material (i.e., Au/Fe2O3), or by a material that would be active for adsorption of all reaction partners, but which is blocked for hydrogen and consequently also for oxygen adsorption by a CO adlayer. In all of these cases the oxidation reactions will take part at the interface between the different areas, or via a spill-over process and the reaction is not limited by CO desorption, which is the limiting factor for the Pt catalysts at temperatures below 150°C.<br> On Pt/gamma-Al2O3 the rather constant selectivity is explained by a saturation coverage of COad which is maintained over a large range operation conditions. For the low-temperature catalysts the selectivity is also very high due to the high activation barrier for the dissociative adsorption of hydrogen. However, on the latter systems the selectivity decreases very fast at decreasing pCO or increasing temperatures as a result of the reduced CO surface coverage. All investigated systems show a more or less severe tendency for deactivation during time on-stream, but the reasons and also the degree of reversibility are very different.<br> In experiments with more realistic simulations of methanol reformer gas (i. e., containing CO2 and H2O), it is found that the platinum-based systems suffer from large H2O-contents, which decrease the selectivity significantly, wheras Au/alpha-Fe2O3 is more sensitive to CO2.<br>For Pt and Au various support materials are compared, but none of them appears to be significantly superior to the originally employed Pt/gamma-Al2O3 or Au/alpha-Fe2O3 catalysts.