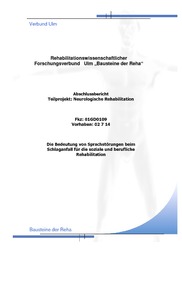 Language plays an important role in modern society. Nowadays verbal communication is necessary in almost every social and vocational environment. Hence, impairment of language has serious effects on an individual´s life. Language impairments, such as aphasia, are very often the result of a stroke. Despite the relevance of aphasia in society, there is only a small amount of data concerning the long term effects of different types of aphasia and their impact on social and vocational rehabilitation after stroke. Therefore the purpose of this study was to investigate the long term effects of aphasia after the occurrence of a stroke in relation to the social and vocational rehabilitation of such patients. The secondary goal was the investigation of prognostic factors indicative of social and vocational reintegration. 127 stroke patients with aphasia (target group) and 80 patients without aphasia (control group) were compared at time of admission to neurological rehabilitation and 12 months after discharge. An aphasia-test as well as rating scales to describe motor, cognitive and psychosocial status were administered. Findings indicate that aphasia after stroke has negative effect on vocational outcome. Language comprehension, which was a subscore of the administered aphasia-test, seemed to be a good prognostic factor for vocational outcome. Furthermore, there was no statistical difference between the groups with regard to social reintegration.