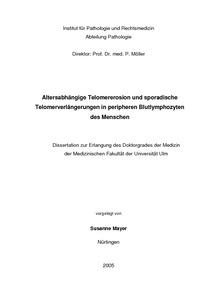 Human telomeres, consisting of highly repetitive hexameric sequences of (TTAGGG)n and associated proteins, form terminal structures of human chromosomes and play a pivotal role in maintenance of genomic integrity and function. During DNA replication, telomeres are gradually shortened, eventually leading to cellular senescence. In this study, human telomere length differences on single chromosome arms of 205 individuals in different age groups and sexes were investigated by T/C-FISH (telomere/centromere-FISH). Pangenomically, telomere shortening was linear up to centenarians in males and in females, whereas average telomere attrition rates were delayed in females. For all chromosome arms, a linear correlation between telomere length and donor age could be found. In general, males had shorter telomeres and higher attrition rates. Every chromosome arm was characterized by its individual age-specific telomere length and erosion pattern, resulting in an unexpected heterogeneity in chromosome-specific regression lines. This differential erosion pattern, however, does not seem to be accidental, since a correlation between average telomere length of single chromosome arms in newborns and their annual attrition rate was found. Apart from the above-mentioned sex-specific discrepancies, chromosome arm-specific telomere lengths were strikingly similar in men and women. This implies a chromosome-specific mechanism regulating telomere length independent of gender, thus leading to interchromosomal telomere variations. Statistics revealed an assymetry in telomere length distribution towards longer telomeres. This skewness was more pronounced in females. As a morphological correlate, randomly distributed telomeres of unexpected length were found. Those phenomena suggest a mechanism counteracting telomeric loss, which seems to be more active in females.