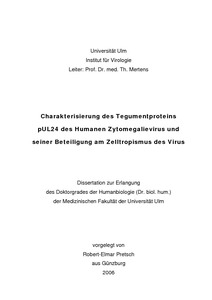 The human cytomegalovirus (HCMV) contains several members of the US22 gene family, specific for betaherpesviruses, whose members have been implicated in cell tropism, transactivation and apoptosis. By yeast two hybrid screening we identified an interaction between ppUL32 (pp150) and pUL24 and confirmed this interaction by coimmunoprecipitation and colocalization in human cells. The deletion of UL24 in the context of the endotheliotropic strain TB40E-4 (TB4) showed no effect in human fibroblasts, but resulted in a 100-fold reduced virus yield in endothelial cells. This defect in endothelial tropism could also be demonstrated in a human organ culture system (renal arteries). Since deletion of UL24 also abolished expression of the adjoining UL25 gene, we used retroviral trans-complementation and specific pointmutations in the start codons of UL24 to demonstrate that UL24 is responsible. In addition, we could demonstrate that the UL24 deletion virus is also impaired in establishing an infection in epithelial, but not in neuronal cell lines. Ultrastructural analysis by conventional and cryo-electron microscopy showed that mutant virus particles are not released from endosomal vesicles. In summary, we show that the tegument protein pUL24 of HCMV is critical for entry into endothelial and epithelial cells.