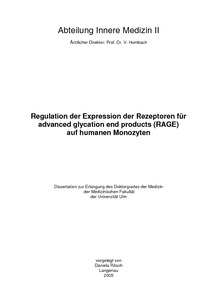 Patients with diabetes mellitus exhibit an increased propensity to develop arteriosclerosis with its sequelae acute myocardial infarction and stroke. Besides various associated metabolic disorders the presence of advanced glycation endproducts, AGEs, and its interaction with the respective receptor RAGE (receptor for advanced glycation endproducts) is considered a major contributor to vascular disease in these patients. RAGE is a member of the immunoglobulin superfamily of cell surface molecules, known to be expressed in vascular cells such as endothelial cells and monocytes. Activation of RAGEs on these cells activates the transcription factor NFkB, subsequently leading to increased expression of pro-inflammatory mediators such as TNF-alpha, thus furnishing lesion development. Clinical data suggest that monocyte RAGE expression is increased in diabetic patients, but to date nothing is known about the underlying mechanisms of this observation. Given that TNF-alpha serum levels are increased in diabetic patients, the present study seeks to investigate the regulation of RAGE expression in human monocytes by the pro-inflammatory cytokine TNF-a.