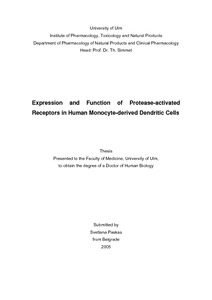 Protease-activated receptors (PARs) are activated by proteolytic cleavage of their extracellular domain, unmasking a new N-terminus acting as a tethered ligand. PAR1 and PAR3 were investigated at the promoter level. Using DNase I footprinting, binding of the AP-1 transcription factor to the PAR1 promoter was localized. This indicates that NF-kB does not activate the promoter directly, but interacts with AP-1, which then occupies its binding site on the promoter. The role of PARs in human monocyte-derived dendritic cells was further investigated. Three different inducers of dendritic cell maturation were used, LPS, TNF-a, and CD40L. LPS maturation elicited enhanced expression of PAR1 and PAR3, while the two other stimuli slightly up-regulated PAR1 and PAR3 expression. PAR4 expression remained undetectable in all three maturation types. Thrombin stimulation of LPS-matured dendritic cells resulted in a chemotactic response. The peptide agonists, PAR1-AP and PAR3-AP, produced thrombin-like effects on chemotaxis. PAR1 and PAR3 antibodies were effective in blocking the thrombin responses. Subsequently we investigated the thrombin signalling pathway in dendritic cells, and detected that thrombin activates the Rho-kinase (ROCK), which phosphorylates the myosin light chain (MLC) 2. Thrombin stimulation also induced an increase in actin polymerisation. Both of these events are important for the cell migration. Finally, the treatment of dendritic cells with the specific pharmacological inhibitor of ROCK (Y-27632), completely abolished the MLC phosphorylation, suggesting that thrombin stimulates the dendritic cell migration through Rho/ROCK pathway. The major finding of this work is that dendritic cells are activated by thrombin. Since both thrombin and dendritic cells are present in atherosclerotic plaques, targeting this mechanism in the endothelium could prevent plaque destabilisation and become a novel therapeutic strategy for the treatment of atherosclerosis.