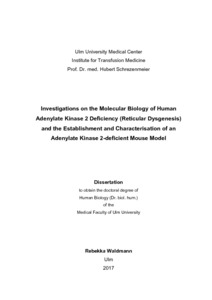 By establishing biochemical, molecular and animal models, this thesis generated data for the understanding of AK2-deficiency. One aim of this thesis was the expression and purification of recombinant adenylate kinase 2 (AK2) protein and the establishment of an enzymatic assay to determine the enzymatic activities of different published disease-causing AK2 missense mutations. An enzymatic adenylate kinase assay was established and validated which now enables the functional testing of adenylate kinase missense mutations. The determination of the enzymatic activity of five previously published AK2 mutations p.[Gly47Arg], p.[Arg103Trp], p.[Arg175Gln], p.[Arg175Pro], and p.[Arg186Cys] showed for the first time that the clinical phenotype of Reticular Dysgenesis (RD) is caused by the absence of the enzymatic kinase activity of AK2. The hypothesised correlation between residual enzymatic activity and normal numbers of B cells, monocytes, or NK cells was disproven. The method established in this thesis allows the future analysis of the enzymatic activity of any unknown adenylate kinase mutation or variation, even of patients with atypical clinical phenotypes and will be helpful to decide if a novel AK2 mutation may be the cause of the disease or not. The pathophysiology of RD, especially why an adenylate kinase 2 deficiency leads to the observed cell-type specific effects, is unknown. The second aim of this thesis was to investigate the expression and regulation of AK1 in haematopoietic cell lines compared to non-haematopoietic cell lines. The expression of AK1 and AK2 in haematopoiesis was characterised in order to support or disprove the previously published hypothesis, that leukocytes might be susceptible to genetic defects of mitochondrial AK2, as they do not express the cytosolic adenylate kinase 1 (AK1) in sufficient amounts to compensate for functionally impaired AK2 (Pannicke et al., 2009). Protein and RNA expression analyses of AK1 and AK2 in human and murine cell lines and in murine primary cells confirmed that AK2 is ubiquitously expressed in almost all haematopoietic and non-haematopoietic cells. AK1 is only expressed in cells which are not affected by an adenylate kinase 2 deficiency. This supports the previously published hypothesis that AK1 is able to compensate for an AK2 deficiency and shows that this hypothesis, established in the human system, is still concordant with the murine system. In addition it was shown that there are some cell types, like low-energy requiring hematopoietic stem and progenitor cells and mature murine NK cells, which need neither AK2 nor AK1 protein expression to survive. However, proliferation and maturation of cells seems to depend on AK2 or AK1 protein expression. Further investigations on the regulation of the AK1 expression revealed that human AK1 protein expression does not directly correlate with total AK1 mRNA amount because several splice variants with alternative 5’UTR exons upstream of exon 2 were identified which do not enable protein translation. It was shown that AK1 protein expression correlates with an AK1 mRNA with exon 1 upstream of exon 2. This AK1 mRNA with exon 1 is regulated mainly epigenetically by CpG methylation of the Ak1 promoter region upstream of exon 1. In addition, AK1 mRNA expression depends on the availability of non-ubiquitous transcription factors. It was also shown that AK1 mRNA can be stably introduced in cells which do not express AK1 protein endogenously and this results in robust protein expression. These new findings are important for AK1 protein regulation in the future and for testing whether AK1 protein is able to compensate for a functional AK2 deficiency. This will lead to a better understanding of the pathophysiology of RD with the aim to eventually improve patients’ treatment. As a third aim, an Ak2 knockout mouse model was established and characterised to provide a model system for further studies on the molecular biology and pathophysiology of RD. A homozygous knockout of Ak2 in mice leads to early embryonic lethality shortly after nidation around embryonic day 6.5 due to a non-haematopoietic defect. A haematopoiesis-specific AK2-deficient mouse model shows also a much more severe phenotype than human AK2-deficiency with embryonic lethality between E13 and E15 due to severe anaemia. Flow cytometry analyses and colony assays revealed an early onset of erythroid development failure in conditional Ak2 knockout embryos. Megakaryocyte-erythrocyte progenitor (MEP) numbers were significantly decreased and a developmental block of early erythroid progenitors from erythropoietin independent progenitors to erythropoietin dependent progenitors leads to an impaired definitive erythropoiesis and results in severe anaemia. It was shown that a main difference between human and murine erythrocytes is the adenylate kinase protein expression. Human erythrocytes express AK1 protein but no AK2 protein and are therefore expected to be AK2-independent, whereas murine erythroid progenitors only express AK2 protein and may be sensitive to an AK2 deficiency. The number of stem cell and progenitor cells (except for MEP cells) is independent of the Ak2 genotype, but the viability of the progenitor cells is slightly reduced. The numbers of CD11b+Gr-1- monocytes and CD11b+Gr-1+ granulocytes, are not altered by murine AK2-deficiency. Nevertheless, murine AK2-deficient CFU-M, CFU-G, and CFU-GM colonies exhibited an abnormal morphology and a negative effect of an AK2-deficiency on the further development and possibly on the function of monocytes, macrophages, and granulocytes may be predicted. A complete characterisation of the B-, T- and NK-cell development and function was not possible due to the early embryonic death of AK2-deficient mice and no pre-B-cell colonies nor single B220+CD19+ pre-B-cells were detectable in Ak2 knockout samples after IL-7 stimulation of foetal liver cells. As matters stand, the AK2-deficient mouse model and the haematopoiesis-specific AK2-deficient mouse model are not suitable to model human RD in mice, but the models offer the potential to discover and understand the cellular and molecular pathomechanism of AK2-deficieny by analysing common features and differences of affected and unaffected cell populations in the human and the murine system.