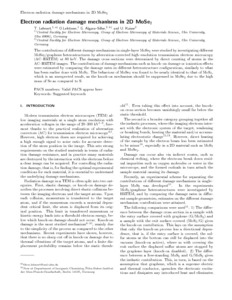 The contributions of different damage mechanisms in single-layer MoSe2 were studied by investigating different MoSe2/graphene heterostructures by the aberration-corrected high–resolution transmission electron microscopy (AC–HRTEM) at 80 keV. The damage cross–sections were determined by direct counting of atoms in the AC–HRTEM images. The contributions of damage mechanisms such as knock–on damage or ionization effects were estimated by comparing the damage rates in different heterostructure configurations, similarly to what has been earlier done with MoS2. The behaviour of MoSe2 was found to be nearly identical to that of MoS2, which is an unexpected result, as the knock-on mechanism should be suppressed in MoSe2 due to the high mass of Se, as compared to S.